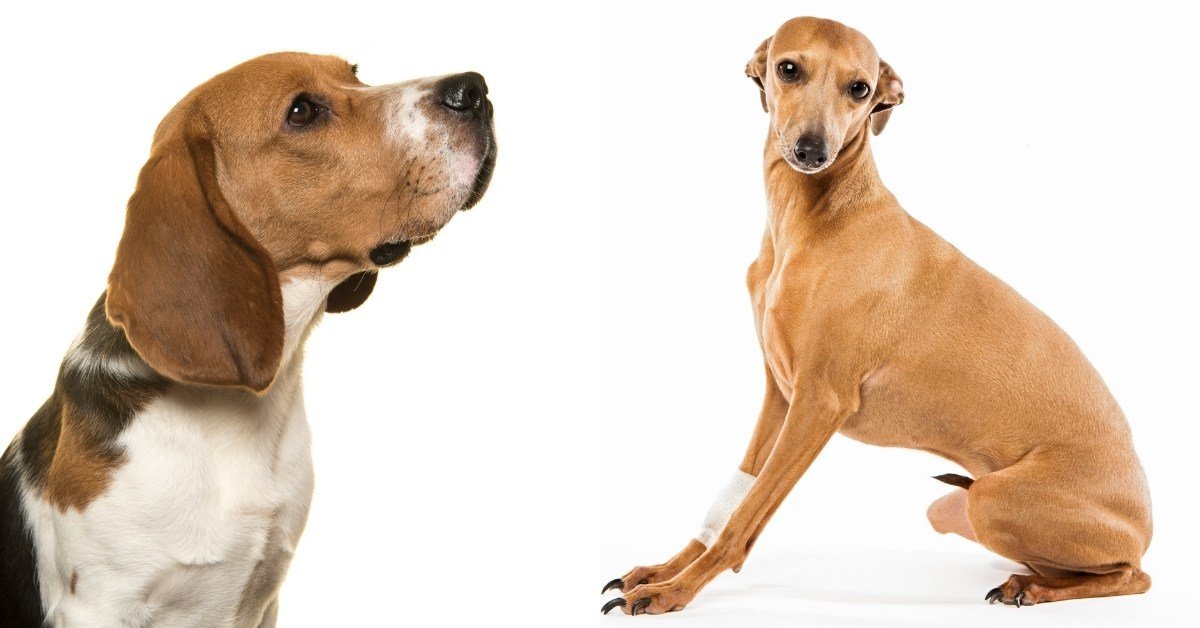 If you’re looking for a dog that’ll be great alongside your children, have hours of fun with you, but also cuddle up with you at the end of the day, you might’ve made the right choice.

Beagle Greyhound mixes are stunning to look at and have loving, loyal personalities. But there’s a lot more to know about them, so let’s dive into it!

Greyhounds are one of the oldest recorded purebred breeds.

They date right back to ancient Egypt. You can see greyhound-type dogs etched into many Egyptian statues and monuments.

Dogs with slim builds and a keen prey instinct were revered as gods. They were known to be fierce and unforgiving, but protective of those that were loyal to them.

This image has continued right up to the modern-day, where greyhounds are known to be loyal pets, but also used as hunting dogs, with the ability to easily catch prey.

Their slender forms make them perfect for sprinting and catching even the fastest rabbits and hares.

Greyhound breeds have also varied over time, creating other standalone breeds that have the same slimline figure as the original, but with slight size or feature differences.

Italian Greyhounds are one of the smallest Greyhound breeds today.

While they maintain their sleek physique for running, they are much smaller and neater than their larger cousins.

Although they are still sighthounds and extremely fast sprinters, they spend most of their lives as little couch potatoes.

A Bit About Beagles

Beagles are fun-loving and playful. They’re excellent companions for children and have a ton of energy.

However, their hunting background, similar to greyhounds, means that they’re not ideal pets for homes with other animals, as they will still have a chase instinct.

Their hunting background means that they are exceptionally intelligent, and they are great dogs for learning tricks.

However, they can also be quite stubborn when they want to be, so you need to make sure you get that training in early so they don’t grow up to be a pain in the butt.

They were originally bred as fox hunters in large packs. They’d sniff out their prey and alert the rest of the pack and horses to follow.

This means they love the company of other dogs as long as they’re socialized early.

A Greagle is a mix between an Italian Greyhound and a Beagle.

Physically, they might look very different, but their personalities work well together to make an amazing pet and their features blend really well to create a cute and unique-looking pup.

Because both dogs are exceptionally intelligent, you’ll struggle to get anything past a Greyhound Beagle mix.

They are alert and curious at all times and don’t like to be left out of any of the action.

Both the Italian Greyhound and the Beagle have strong prey instincts, meaning they will chase after small animals.

The Greyhound, being a sighthound, has a keen eye for anything that moves.

Whereas the Beagle, a hunter by scent, can track down anything by sniffing. This combination means that you’re likely to have a serial squirrel chaser on your hands.

For this reason, you probably shouldn’t get a Greagle if you have small pets (bunnies, hamsters, guinea pigs, etc.). While they do love the company of other dogs, a cat might not be the best idea.

Both the Italian Greyhound and the Beagle are classed as medium-sized dogs. This means your Greyhound Beagle mix will grow to be around the same size.

The largest recorded Greagle is around 15 inches at the shoulder.

They are slightly heavier than a Greyhound, but not normally quite as heavy as a Beagle, making the average around 40 lbs.

However, you need to be prepared for your dog to look more like one parent than the other, so the size could differ.

In general though, you won’t have a huge dog, but because of their active and playful nature, you will need a sizeable backyard to give them enough space.

While Beagles have their characteristic black, brown, and white markings, an Italian Greyhound can be any combination of colors.

So, the coat on a Greagle can essentially be any color or combination. The most common for a Greagle though is black and tan.

Their coats are a mixture of the Greyhound’s very fine, short hair and the Beagle’s slightly longer, coarse hair.

You will find that the hair itself is much thicker than a Greyhound’s though, taking more after the Beagle.

This is great as you don’t need to worry as much about wrapping them up in the winter.

You should brush your dog once a week just to get rid of any excess – but, luckily, they aren’t massive shedders.

Also, if you give them enough exercise, their claws will be worn down naturally, so there’s not a great deal to do there either.

There are a few known issues with the Greyhound Beagle mix breeds that you will need to consider before taking the leap.

Beagles are prone to epilepsy and this trait is sometimes passed down to the Greagle. It’s normally not life-threatening.

However, it can be scary if you don’t know what the seizures are. But, luckily, epilepsy can be treated with long-term medication.

Yes, some Beagles have dwarfism. This isn’t a health issue in itself.

However, some of the bone structure and organs can end up shaped a little differently, which may cause issues in the long run.

One of the most common health issues that you’ll come across with a Greagle is hip dysplasia.

This is when the hip joint comes out of the socket and rubs away on the bone, making it incredibly painful for them to walk.

This could be caused by an intense play session, or it could be a genetic issue.

it can be resolved in the first instance by operating, however, if it happens once, it’s possible that it could reoccur. You’ll need to discuss with your vet to decide on the best treatment.

Bloat happens when a high carb diet (which your dog will need to maintain their energy), creates too much gas.

If the stomach twists while it’s full of gas, the dog can’t expel it, making it very painful and sometimes even life-threatening.

If you notice that your dog is becoming lethargic, has lost their appetite, or has a swollen stomach, take them straight to the vet.

Greyhound Beagle mixes typically have very few life-threatening health complaints, meaning they have a fairly long lifespan. They can live comfortably for between 12-15 years if you take good care of them.