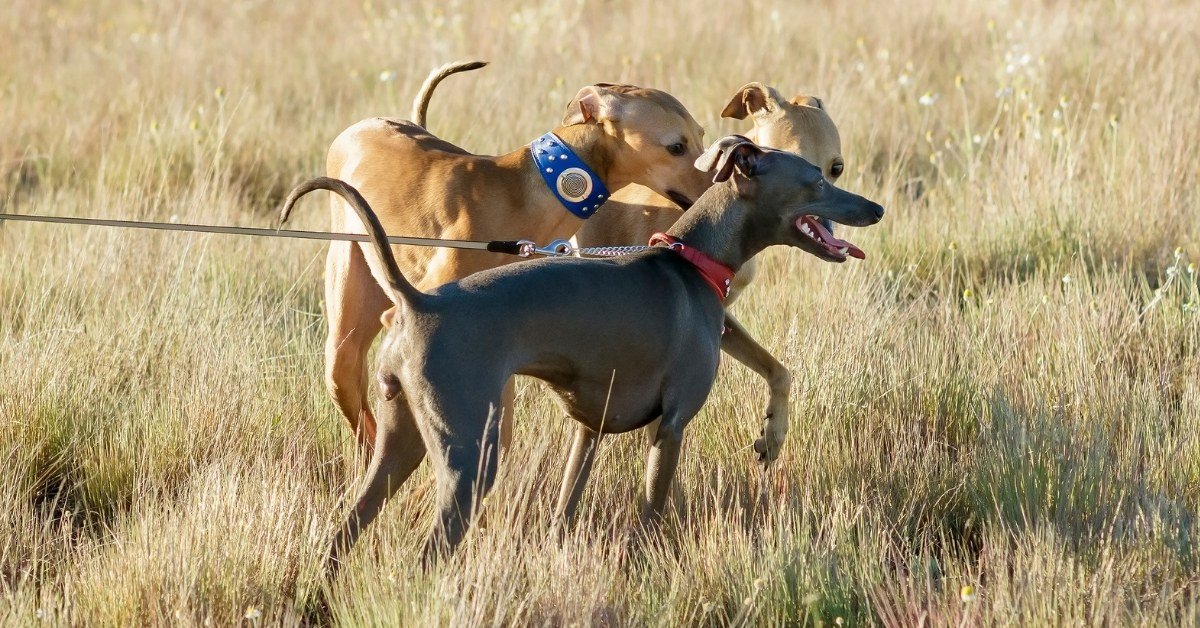 When people think of greyhounds, they immediately think of the standard racing dogs with slim, slender frames and elegant postures. They’re the fastest in the dog world, reaching speeds of up to 45 miles per hour.

Greyhounds are sighthounds, meaning they have keen vision and a chase instinct that is activated upon seeing their prey.

They’re fast enough to chase down prey from a long distance, in contrast to scent hounds, who would track prey over a long distance and wait until they were as close as possible before making a move.

Their origins can be traced right back to Egypt 4000 years ago when they were used as hunting dogs. However, since then, their breed has been split off into a few different factions, and each has its own unique features.

The standard greyhound is the most popular greyhound to have as a pet. They’re known for being incredibly affectionate and loving, and they’re one of the quietest dogs around.

They have low energy levels because they have an extremely fast metabolism, meaning they can sleep for up to 16 hours a day, and despite their speeds on the track, they don’t actually need more exercise than other dog breeds.

This makes them excellent apartment dogs, despite their size. They have an elevated pack mentality, which means that they aren’t particularly independent and suffer from anxiety if left alone for too long.

This means they aren’t the best for people who have a busy lifestyle, but their kind and gentle nature makes them the perfect breed for a family with children.

The Italian greyhound is the smallest of the greyhound breeds. They only weigh 15 lbs. in adulthood and are the perfect miniature version of the standard greyhound.

Although they have the same slender physique, they’re a relatively new breed created to be more of a lap dog than a hunting dog.

They have loving and loyal personalities but are slightly more curious and independent than the standard greyhound and have more energy.

They are just as affectionate and gentle as their larger counterparts, meaning that they work great in families with children.

Although they still have the remnants of a chase instinct, they aren’t as fast as larger greyhound breeds and rarely chase anything except just to have fun.

Unlike other, larger greyhounds, they will get along with other pets in your household for this reason.

Check out our full posts on the differences between Italian Greyhounds and traditional Greyhounds here.

Spanish greyhounds are thought to be the oldest greyhound, dating right back to the Egyptian dogs that we see on tombs today. There’s evidence of them being introduced to Spain as far back as the 2nd century AD.

They are the greyhound that looks the most like our more modern standard greyhound. However, they have slightly longer ears and thinner, sharper faces.

Spanish greyhounds can reach weights of up to 60 lbs. They come in all different colors, just like the standard but are most common in black and white or grey and white colors.

They have the same friendly personality as the standard and are best when they live with others of the same breed.

Because they are one of the oldest breeds of dogs, they don’t suffer as much from common health issues that more modern breeds do as they aren’t victims of over-breeding.

Afghan hounds have the same slender body type as standard greyhounds. However, it isn’t easy to see as they have a long, flowing coat covering their whole body.

They were initially bred to survive in the cold temperatures up in Afghanistan’s mountains and were hunting dogs. However, they’re now more suited to dog shows with their elegant features and beautiful long hair.

Although they do make excellent pets, their personalities aren’t quite as loving as other greyhound breeds. They are fine to be left alone and don’t need your company quite so often.

They’re intelligent and aloof but will still be great with families with children, though they tend not to get along too well with cats or other animals.

The one downside to the Afghan hound is coat maintenance. But, despite their appearance, they are hypoallergenic, so they are great for people with allergies.

However, their hair needs a thorough brush once a day to keep it smooth and shiny, and they’ll need a trip to the groomer at least once a month.

Arabic greyhounds, also known as ‘Sloughi,’ were bred in Northern Africa, most commonly in Morocco.

They have a slightly wider stature than a standard greyhound, with thicker legs. Although they keep the thin, characteristic face, it’s framed by long, low-hanging ears.

They’re graceful and aloof as a breed and don’t necessarily need a lot of attention. However, they still need a larger space to live in and up to three walks per day.

Unlike other greyhound breeds, they tend to only come in a single full color – either grey or tan.

They’re also known to be one of the louder greyhound breeds used in Africa as guard dogs for farmsteads in more recent years.

The Scottish version of a greyhound is the deerhound. They are much larger in stature than other greyhound breeds and were developed wholly for chasing down deer in the Scottish Highlands.

They have much thicker set bones and a slightly wider face and can reach up to 100 lbs. and 32 inches at the shoulder. They’re also covered with thick wirey hair that helps to keep them warm in the colder climate.

They have the same loving personality as other greyhounds and love to be with other dogs, so it’s always better if you get two.

However, they have slightly more energy than other breeds, meaning you’ll have to be prepared to go out on longer walks more often.

Compared to the standard greyhound, which only really requires two short walks a day, your deerhound is likely to need three short walks or a longer hike to keep them happy.

Because of their extra energy and sheer size, this breed is better off in a larger home.

Russian greyhounds, also named ‘Borzoi,’ are a larger breed with a stockier structure than a standard. They have the same facial shape and long, thin legs but are covered in a thick, long coat.

They can reach weights of up to 100 lbs. at maturity and can grow up to 33 inches at the shoulder.

They’re friendly with other dogs, people, and other animals but do have a lot of energy and need a lot of space and attention.

They have less of a chase instinct than standard greyhounds, meaning they are easier to train. Their intelligence and loyalty make them great family pets if you have a larger home.

However, their size does come with some health complications such as arthritis, elbow dysplasia, and heart disease. They can also gain weight incredibly quickly if they don’t get enough exercise.

Their health complications and size do create some strain on their organs, meaning they have a slightly lessened life expectancy than other greyhounds, at an average of 12 years.

They need a family with lots of time on their hands, as they require a strict exercise regime of two short walks and a longer walk on most days.

Check out our full article on Borzois here.

Persian greyhounds, also named salukis, are one of the oldest greyhound types, originally used as hunting dogs for nobility.

Their coats differ from other greyhounds as they have longer, coarser fur. They still have the same slender body and defined facial features; however, their ears are much longer and hang low by their face.

Their personalities are much more independent than a standard greyhound, meaning they suffer less from separation anxiety and are better pets for families on a busy schedule.

We have an entire post on the differences between Salukis and Greyhounds here.

Whippets are a slightly smaller but perfectly formed version of the standard greyhound. They’re one of the most common breeds owned in Britain today.

They reach around 22 inches at the shoulder and are also incredibly fast due to their elevated muscle density and thin body type.

They usually participate in amateur dog racing as they have the same chase instinct as their larger cousins.

Although they have gentle personalities and are great with children, they aren’t quite as lazy as standard greyhounds and, despite their smaller size, will need more room to run around in the home.

Like other greyhounds, they have a strong pack mentality and do best with other dogs, but they aren’t quite as accepting of different types of animals, and whippets can cause issues if kept with a cat.

All greyhounds make fantastic family pets and will be loyal and loving. However, there are some differences in their needs and personalities, so make sure you do your research to see which is the best fit for your home.

Read our extensive article on Whippets vs Italian Greyhounds here.

2 thoughts on “9 Different Types Of Greyhound: Their Personality, History & More”