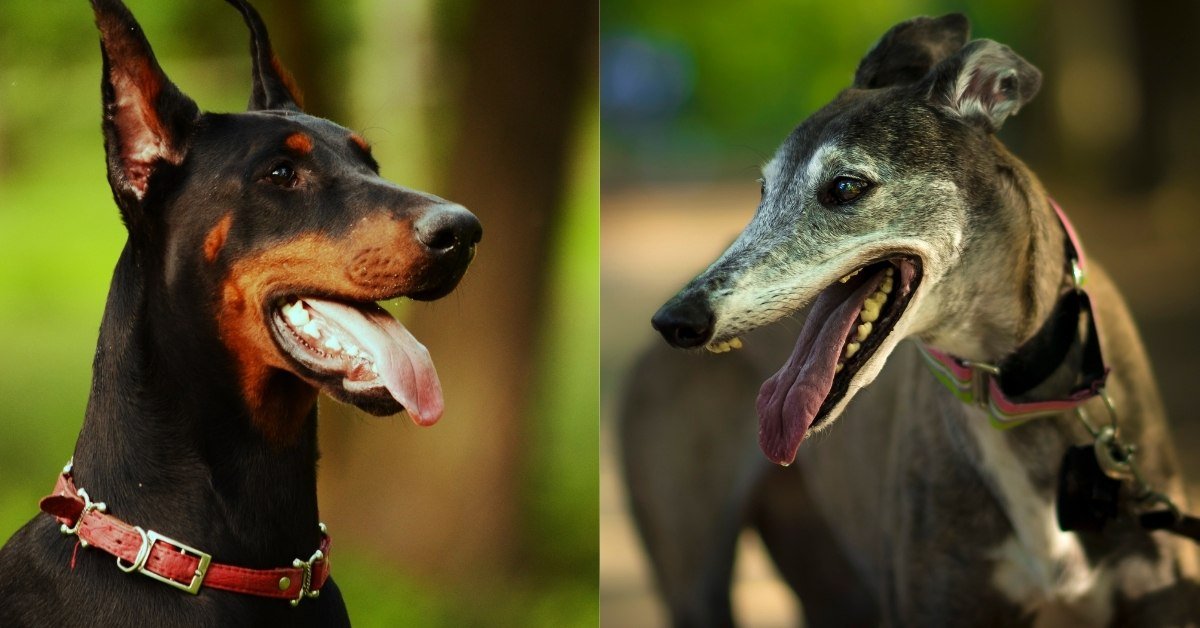 Greyhounds are awesome in every sense (I have an entire website dedicated for them for a reason).

And dobermans are very intelligent (5th on the smartest dogs list) as well as fierce and protective.

So what might you expect from a mix of the two? Well, though I don’t own one myself, I have met quite a few and done some extensive research about their characteristics and how they mix.

Greyhounds are known to be a docile and independent breed and other than their quick trip around the track, they’ll actually spend a huge part of the day sleeping.

They are excellent with children and have a gentle and loving nature. They’ll just love to snuggle up with you all day.

However, they don’t work well for families with small pets, as they maintain their chase instinct, even when they’re retired from the track.

Placing them in a room with a rabbit could cause an accident.

A Little Bit About Doberman Pinschers

Dobermans, on the other hand, are an excitable breed who just love to be around people. They have a fierce, protective nature and love to be active.

They’re a great dog to have if you have a large outdoor space or if you love the outdoor lifestyle.

They work well with other dogs and were originally bred as guard dogs working in teams.

They are now used as police or military dogs because of their obedience and intelligence.

The Doberman-greyhound mix is a relatively new mix breed, only originating in the early 2000s, but its popularity has soared since then.

While both Dobermans and Greyhounds can make excellent family pets, there are a few things you should know before taking the leap with a mix of the two.

Doberman-greyhound mixes usually have extremely friendly personalities and are great pets for families with small children.

They take the laid-back approach to young children that Greyhounds do, so they usually won’t be too phased by the occasional ear or tail-pulling incident.

However, they are also very protective – a trait that they get from their Doberman side.

Once your dog has bonded with the family, they’ll do anything to protect them and it might be difficult to get them to leave your side.

The mix is known to be highly intelligent and can be trained from an early age.

However, it’s still not advisable to keep your dog with small pets such as rabbits and guinea pigs.

Although a Doberman typically has a less dominant chase instinct, the Greyhound is specifically bred to chase and kill these animals.

So, if your Doberman-greyhound is a chip off the old block on the Greyhound side, it could end badly.

Both Greyhounds and Dobermans are large dogs, so taking on a puppy that’s a mix of the two will usually mean that you’re going to end up with a fairly sizable companion.

Both males and females can grow to around 26-30 inches in adulthood, weighing anything between 65 and 85 lbs.

For this reason, they aren’t the best choice for apartment living and would do better in a larger home with lots of outdoor space.

Their size also means that crate training is less of an option, and with their need to be beside you most of the time, it can become a little irritating if you’re used to your alone time.

Their bodies are equipped for short bursts of speed which require lots of energy. After the race, they need to gain that energy back by sleeping.

However, Dobermans are a little sturdier and don’t need to sleep quite so much as they can maintain fats and carbohydrates to keep their energy up for longer periods.

The result of mixing these two breeds is that you have a very fast dog who has a reasonable amount of energy to burn.

You will need to be prepared for a couple of walks a day – every day and have a large, enclosed area to allow them to run off some steam.

While Dobermans are typically the black and tan signature coloring, Greyhounds can come in all different colors including fawn, brindle, blue, and bi-colored (black and white).

Depending on which side of the family your Doberman-greyhound gets its good looks from, they could be any of these colors.

Both breeds have a naturally short, straight coat which is relatively coarse in texture.

This will be passed down to your mix, usually giving them an appearance a little like an ungroomed Greyhound.

Although your mix may have slightly longer fur than a typical Greyhound, the fur isn’t likely to be very thick and they could still suffer in extreme temperatures.

So, you’ll need to make sure that they dress appropriately for winter and stay out of the sun on hot days.

Their coat will generally need a good groom once per week using a soft brush to pull off any dead fur, but other than that they’re a very low-maintenance dog when it comes to grooming.

They don’t even need scheduled baths – their coats excrete natural oils to keep them clean, so you’ll only need to bathe them when you feel they’re dirty.

Though, always remember to brush their teeth regularly to prevent gum disease.

Both Dobermans and Greyhounds are relatively healthy breeds so it’s a safe mix.

Doberman-greyhounds are known to live between 10-13 years with minimal health problems throughout.

One of the main things that you will need to look out for though is hip dysplasia.

Although the Greyhound and Doberman breeds are quite compatible when it comes to mixing, hip dysplasia can become a problem at any stage in their lives.

The problem occurs when the ball of the hip and the socket don’t line up correctly.

It could be an issue caused when your dog has been out for exercise and turned too quickly or a degenerative condition created by the movement wearing away the bone.

The early signs of hip dysplasia are:

Once hip dysplasia has occurred, it isn’t fully curable, however, it can be managed. If severe enough, your vet may suggest they operate to correct the hip placement.

However, it may occur again even after this operation.

There are also medications that your vet can prescribe to increase the vitamins and strengthen the tissue around the hip to minimize the discomfort.

Hip dysplasia is not treatable using any home remedies, so if you notice any discomfort, you should always seek veterinary care.

Overall, Doberman-greyhound mixes are an excellent choice for a family pet. They’re loving and loyal and don’t require a lot of maintenance.

Just make sure you have a large space to play in and get that training in early.