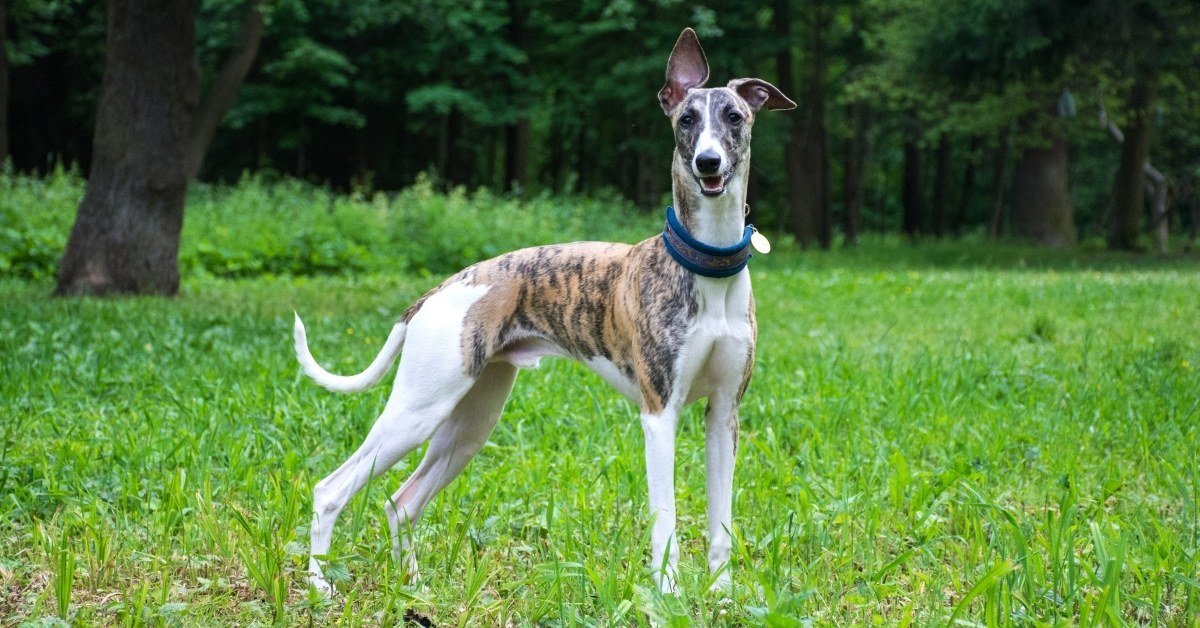 The greyhound breed can be traced back over 4000 years where the slender physique, short hair, and body built for speed were favorite features of the Egyptians and Persians.

Greyhounds are also favorites in the modern world for their racing ability linked to their chase instinct. But they weren’t always made for this purpose.

Greyhounds are actually a creation of selective breeding from strong characteristics of other, much older breeds.

This family of hounds are named ‘sighthounds’ as they are known for hunting purely based on sight, relying on their speed to catch prey, rather than scent hounds who will likely track their prey over long distances.

Some sighthound breeds are unfortunately extinct, but others are still very much alive, and the breeding over 1000’s of years has actually created many “sub-breeds”. But each has its very specific assets.

Let’s go through them!

Whippets are the most similar dogs to greyhounds but only reach around half the size (about 22 inches at the shoulder). They were originally bred in England as a smaller, more manageable alternative to the full-size greyhound.

They’re the most common breed kept as pets from the greyhound family and are known for being accepting and loving with other pets too.

Unlike greyhounds, they don’t have a strong chase instinct, meaning they usually get on well with cats in the household.

Although their chase instinct is more limited, they do enjoy exercise that requires speed, such as agility and flyball.

They’re also one of the quietest breeds of dogs around, meaning they aren’t great as guard dogs, but are excellent household pets, especially if you have neighbors.

Afghan Hounds, originally from Afghanistan, are a beautiful breed that has the same figure as a greyhound, but with long luxurious coats.

Named ‘Tazi’ by the Afghans, they’re a favorite at dog shows because they’re easy to train and have amazing, laid-back personalities.

They’re a great family pet too, with the only downside being their long coat, which will need brushing every day, and a professional groom at least once a month.

Salukis are one of the oldest breeds of dog, the majority of greyhound-type breeds will actually have some Saluki heritage.

They can be traced all the way back to the first human civilization in the Middle East, where they were known as loyal guard dogs and fierce hunters.

So much so that they were even carried upon the backs of camels whilst walking across the desert.

They have a thin coat with a wispy, long tail and slightly wider set legs than a greyhound. They make amazing family pets and are known for their natural intelligence.

The clue’s in the name; these dogs were bred in the highlands of Scotland and used specifically for deer hunting.

Scottish deerhounds also have curly, wiry fur covering their whole body to keep them warm in the cold temperatures of Scotland.

They traditionally only come in a dark grey color, although it’s been known to have black or light brown versions on occasion.

Although deerhounds are very loyal and friendly, they aren’t very common as pets in the modern day as their fur is far from hypoallergenic and they require a lot of space to move around.

The Italian greyhound is the smallest breed of sighthound, only reaching 15 inches at the shoulder and weights up to 11 pounds. Despite this, they’re actually the breed that resembles greyhounds the most.

They generally come in solid colors of grey or black and are a miniature version of the greyhound, sharing their skinny body, nimble legs, and hypo-allergenic coat.

They’re a fairly new breed and although they are class in the sighthound category, they aren’t really bred for hunting. Their initial purpose was as a lap dog for nobility, but they do enjoy walks and plenty of exercise.

Although they are great family dogs and can get along with other pets, it’s been noted that they’re more difficult to train initially and do suffer quite severely from separation anxiety (read more about separation anxiety).

Their size makes them great apartment dogs, but you will need to ensure you have a friend for them otherwise you may have problems if you need to leave them alone during the day.

Spanish greyhounds are incredibly similar in size to greyhounds, but with a slightly wider set face and larger ears. They also have a much longer tail than standard greyhounds, lacking the normal flick at the end.

These greyhounds were initially bred as fashion dogs for Spanish nobility, but in more recent years, they’re used as hunting dogs – utilizing their speed to outrun rodents and birds.

They are notoriously good with children and have a more reserved personality than most other sighthounds, meaning they’re less confident.

They’re also known for their calm temperaments, making them extremely easy to train with little risk of aggression.

The Borzoi breed originates from Russia where they were originally used for wolf hunting.

They are slightly taller than greyhounds and although they still have the same body type, they have a long, wire-haired coat to keep them warm.

The Sloughi is a beautiful sighthound coming from the African desert. Their ears are larger than a greyhound’s and are usually downward turned.

They have a longer snout and wider face; however, they maintain the sleek body type. They’re normally a sandy color with black facial markings, helping them to blend into their desert home.

They make great family pets, but unlike greyhounds, who are known to be loving and sociable with everyone, they can be quite standoffish with strangers, making them great guard dogs.

One of the smaller breeds of sighthound, the Ibizan hound has a slightly bigger build than a greyhound, despite being smaller and lighter – weighing up to 65 pounds.

They normally come in caramel and white color with large bat-like ears that point directly up to the sky. Their tails are also missing the characteristic flick at the end which is common for greyhounds and most other sighthounds.

They are also one of the few sighthounds that will bark when they feel threatened. Greyhounds and most other sighthounds remain silent or will even try to make friends with an intruder because of their sociable nature.

However, Ibizan hounds were a fairly recent creation and have been bred with watchdog characteristics in mind. They’re loyal and will help alert you to any danger.

Pharaoh hounds come in a rich chestnut color and are more similar in looks to the Ibizan hound. They have a stocky figure and larger paws than a greyhound specifically built for negotiating the rocky terrain of the Maltese islands.

They were actually named ‘pharaoh hounds’ as they best resembled the images on the sides of tombs in Egypt.

However, more recently it’s been discovered that these hounds would probably have been more closely related to Azawakh and are now in fact, an extinct breed.

Pharaoh hounds still remain loyal companions though and do share the intelligence and good temperament of other sighthounds but are less built for speed.

Although they do need a lot of exercise, they’re more likely to enjoy long walks than large open areas where they can sprint away.

These are the least similar looking of all the sighthounds, with their shorter, stockier build and distinctive curled tail.

The males reach around 24-26 pounds in weight at their heaviest and stand at around 17 inches at the shoulder.

They originate from North Africa, like many sighthounds, and are known for their confident personalities and above-average intelligence.

They’re also hypoallergenic, so they’d be great dogs for people suffering from allergies.

The Azawakh is almost identical to what you’d expect from a traditional greyhound breed. They have delicate legs and feet making them seem graceful and sleek bodies showing the ribcage – even when healthy.

Their ears hang low from their head, rather than the slightly upright position that you’d expect from a greyhound and their muzzle appears slightly thinner and more refined.

They were originally bred for guarding the camps in West Africa at night – their thin fur perfectly adapted to the African heat. However, with the lack of work their breed is currently in decline.

They’re often used as hunters or farm watchdogs. Their purpose in breeding has meant that they aren’t as comfortable with human company as other sighthounds.

And even though they are friendly, they don’t crave your attention quite as much as a greyhound would.

Despite their differences in body type, coloring, and coat style, all of the dog breeds within the greyhound family have one thing in common – temperament.

They’re all known for being great, loving family pets who are easy to train and incredibly loyal and sociable. They also need the right diet and lots of exercise to maintain their healthy physique and to keep their muscles strong.

Despite their size and appearance, they can be quite lazy and mostly make excellent apartment dogs but can get quite anxious if left alone, so you’ll need to have a backup plan if you have a busy lifestyle.