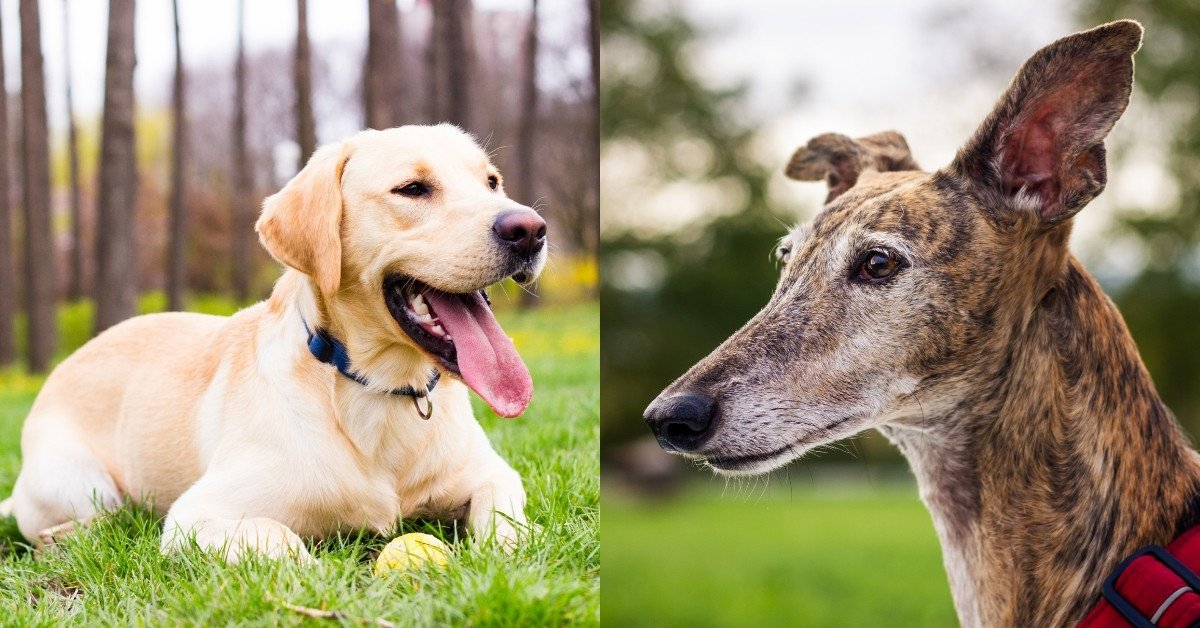 You’re looking to bring home a new dog, and not just any dog, a mix!

Well, the Greyhound Labrador mix is an amazing dog with a loving and loyal nature. But there’s a lot more to know about it!

The Greyhound is a dog breed that was originally popular for racing. However, nowadays, it is seen more as a fantastic, laid-back family pet.

A Greyhound has an athletic look with a quiet, gentle nature. This personality is why you will commonly see this dog fitting in well with families that have children.

In the past, the Greyhound was kept for hunting as it is extremely nimble and can easily outrun its prey at speeds over 40mph.

It is the fastest breed of dog available, that is when they’re not cuddled up on the sofa with you desperate for affection.

Greyhounds are a very loyal breed and will constantly crave love from you. So much so that they often suffer from separation anxiety.

Overall, if you’re looking for a family pet that doesn’t require too much maintenance, then the Greyhound could be the one for you!

A Bit About Labradors

The Labrador is a dog breed that originated in Newfoundland and contrary to belief, not actually Labrador (the region)!

Not much matches this breed when it comes to intelligence which is reflected in how easy they are to train.

The Labrador has an excellent sense of smell which is why they’re used regularly by the police as part of the drug and bomb detection squad.

They have a habit of demonstrating their eagerness to please and this may be the reason why they are the most popular dog in the USA and the UK.

A Labrador will bond with the whole family providing it receives the correct amount of socialization.

Love and affection are not something a Labrador has a lack of, making it an ideal family dog.

A Greyhound and Labrador mixed breed is often referred to as a “Greyador” and is a popular choice when it comes to mixing two great breeds.

It is a blend of the Labrador’s good nature and intelligence and the Greyhound’s elegant, graceful appearance.

However, like with any breeding, the offspring may take the personality of any of the parents so there is no guarantee you will receive the traits of one particular parent.

The Labrador Greyhound mix is chosen as a family pet due to its laid back, loyal and affectionate personality.

With any family pet, however, it is crucial to make sure they are socialized as early as possible.

The Greyador generally possesses the same temperament as both the Labrador and the Greyhound which are equally affectionate and very loving companions.

A Labrador/Greyhound mix is in the medium/large category and can reach as tall as 27 inches. Usually, the average weight of this mix will be around 29-36kg.

This is an average of the two breeds.

The Greyhound is considered a large dog reaching heights of up to 30 inches tall for a male and up to 25 inches for a female.

The weight can also vary, for the male, it’s between 27-40kg and the female 26-34kg. Whilst not as wide as other breeds, the Greyhound is certainly not a small breed of dog.

The average life expectancy is between 10-14 years.

The Labrador is classified as a medium-sized dog but due to some of them being fairly sturdy and fluffy, they can appear to be large.

The male Labrador will usually grow up to a maximum of 25 inches and the female a little less at 23 inches.

The weight of the male is between 29-36kg and the female at 25-32kg. You can expect your Labrador to live on average between 10-12 years.

Greyhounds come in a range of colors, such as the following:

All of these colors are a fantastic choice, however, you may struggle to get your hands on a “blue” greyhound as these are considered to be rare!

Labradors come in these colors:

Whilst all the colors of the Labrador are fairly common, the chocolate Labrador is considered to be the rarest.

When the two are bred together to create a “Greyador” you can select from the following color choices:

The benefit of breeding two types of dog usually opens up a wider selection of colors which can be seen here with the Greyador!

Like most breeds, you may encounter some health problems with your Labrador Greyhound mix. The most common ones can be found below:

Whilst most of these can be found in any breed, the majority of these potential health problems are usually transferred from the Greyhound, which is more problematic when it comes to health.

When we look at both of these breeds separately, it is clear that both the Labrador and the Greyhound are extremely loyal and affectionate canine companions.

Thankfully, this is transferred over to the Greyhound Labrador mix which makes the “Greyador” a brilliant addition to any family and one to be considered for sure.

If you are wondering how much what’s the price of a Labrador Greyhound mix, you can expect to pay anywhere between $400 to $1000 depending on the choice of breeder and the lineage of the dog.