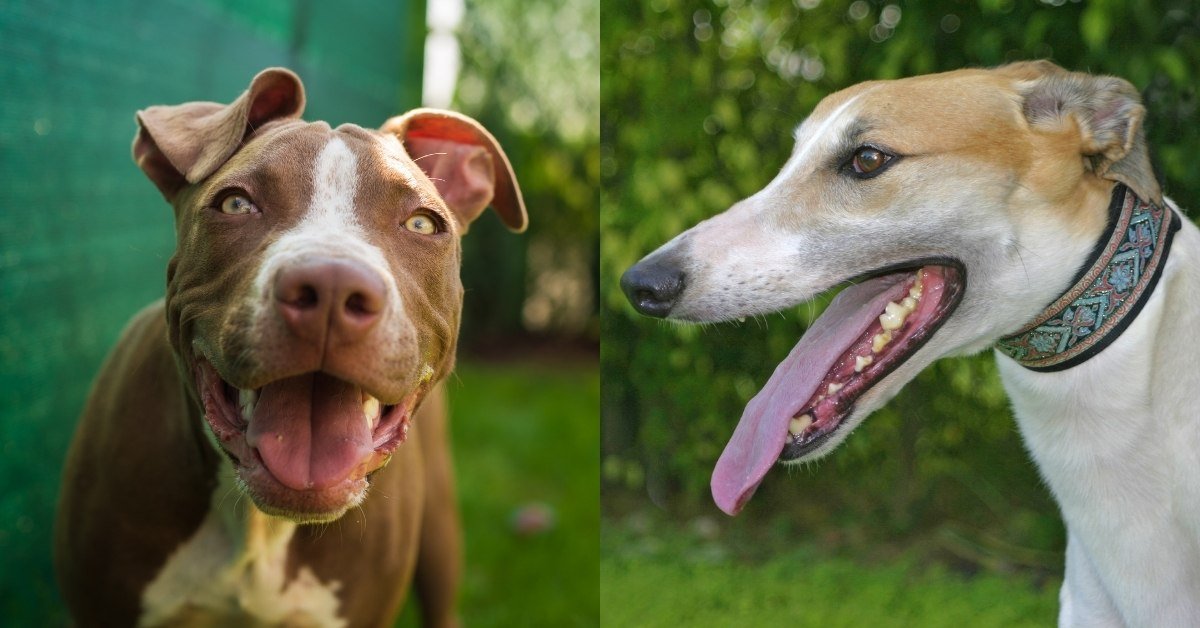 A Greyhound Pitbull mix is often called a Greybull Pit, they make excellent lap dogs, despite their size, and will never get bored of playtime.

But what else is there to know about them? Well, I’ve gathered everything up, so let’s dive in!

Greyhounds are loving and cuddly companions in the house. They love children and enjoy the constant company.

Their racing background gives people the impression that they have a lot of energy and will require constant exercise. However, this couldn’t be further from the truth.

Greyhounds are sprinters, not long-distance runners. While they’re really fast, they run out of energy very quickly and need to spend a lot of time resting to regain their energy.

Walks should consist of an enclosed space where they can sprint and blow off steam – after roughly 20 minutes they will want to come home and laze around for the remainder of the day.

They also love company and can get very lonely, so they’re not the best choice for a family with a busy lifestyle.

They can suffer from anxiety if they’re left alone for too long, so it’s a good idea to get them some company or ensure that you’re home for them during the day.

A Little Bit About Pitbulls

The Pitbull breed originated in the UK when the Old English Bulldog was bred with a terrier to create a more athletic dog with a stronger jaw and broader shoulders.

The breed is basically a larger version of the Staffordshire Bull Terrier – both breeds were originally used for blood sports such as bull-baiting and bear-baiting.

When blood sports were common, Pitbulls were bred to be aggressive, living cruel and abused lives to make them more entertaining in the ring.

Despite some contention around this topic, this aggression usually doesn’t display in pitbulls today, as long as they’re raised properly.

However, they are still banned in some countries including the UK and Japan.

As these blood sports have been slowly eliminated, they became mainly known for their loving nature and loyalty to families.

They bond easily with people, and, despite their heritage, they can actually make great companions for children, be awesome guard dogs, and even work well with other pets.

They are naturally full of energy and will need a large space to run around and play.

The Greyhound Pitbull mix is one for an experienced dog owner.

Their playful nature and enthusiasm to be part of the family will brighten your day. However, they can easily get carried away if you don’t train them adequately from an early age.

They need a lot of care and attention and shouldn’t be left alone for too long otherwise they could become destructive.

While this mixed breed is an excellent fit for homes with children, they do maintain their strong prey drive from the Greyhound side.

This means that you shouldn’t introduce your dog to small animals, as they’re likely to want to chase them.

You will also need to be prepared to take your dog on a long walk each day. Preferably, let them off the leash in an enclosed outdoor space.

After the walk, your dog needs to have constant access to a large yard to run, play and burn off excess energy.

You should also have plenty of smart toys and food reward devices to keep their mind stimulated, happy, and healthy.

The Greyhound Pitbull mix is a dog for an outdoorsy family with a lot of time and love to give, it really isn’t suitable for apartment living.

The size of your Greyhound- Pitbull mix can vary significantly.

As Pitbulls were originally a crossbreed between an English Bulldog and various types of terrier, the actual size of a Pitbull is never guaranteed.

It’s also normally the case that female Pitbulls are significantly smaller than males.

A female Pitbull is usually around 18 inches tall at the shoulder, whereas males can reach heights of 22 inches.

Greyhounds can reach heights of 29 inches at the shoulder. Although they weigh much less than a Pitbull due to their slender figure.

Depending on where your Greyhound Pitbull mix gets its genes from, you could end up with a dog anywhere between 18 and 29 inches tall. They could also weigh anything from 30-85 lbs.

This means that you’ll need to be prepared for a larger, stockier dog and ensure you have enough indoor and outdoor space to accommodate their needs.

Both breeds come in a range of colors, so the color variation in your Greybull Pit can be vast.

The coats of both dogs are also very short. This means that that you’re likely to end up with a dog with very short, fine fur.

This is great for grooming. It means that they don’t shed too much, and they won’t need to be brushed more than once per week.

Their neat, tidy fur also won’t need a professional groomer to cut it back very often. You could probably get away without grooming for 3-4 months.

However, their exceptionally fine coat does mean that they may feel the cold easily. You will need to wrap them up throughout the winter months.

That’s why should always ensure that your breeder has valid health certificates and that you see both parents before committing.

Hip dysplasia occurs when the hips come out of their sockets or aren’t aligned properly.

This causes the bones to rub together uncomfortably and can make it painful or impossible for your dog to walk. You’ll notice this if your dog is limping or struggling to walk.

It can be corrected by operating but does tend to happen multiple times after the first occurrence.

Bloat (GDV) is a condition that often usually affects older dogs. But both Pitbulls and Greyhounds are prone to it a little earlier in life.

The condition occurs when the dog’s stomach twists, holding any gas inside. This makes it incredibly painful for your dog to move or eat.

You’ll notice this if your dog becomes lethargic, stops eating, or is sore around the belly.

A Greyhound-Pitbull lifespan is typically between 10 and 13 years. So you’ll have plenty of time to get to know your new best friend.

Make sure you have the space, time, and energy to deal with such a sweet, loving dog and you’re in for a world of fun!