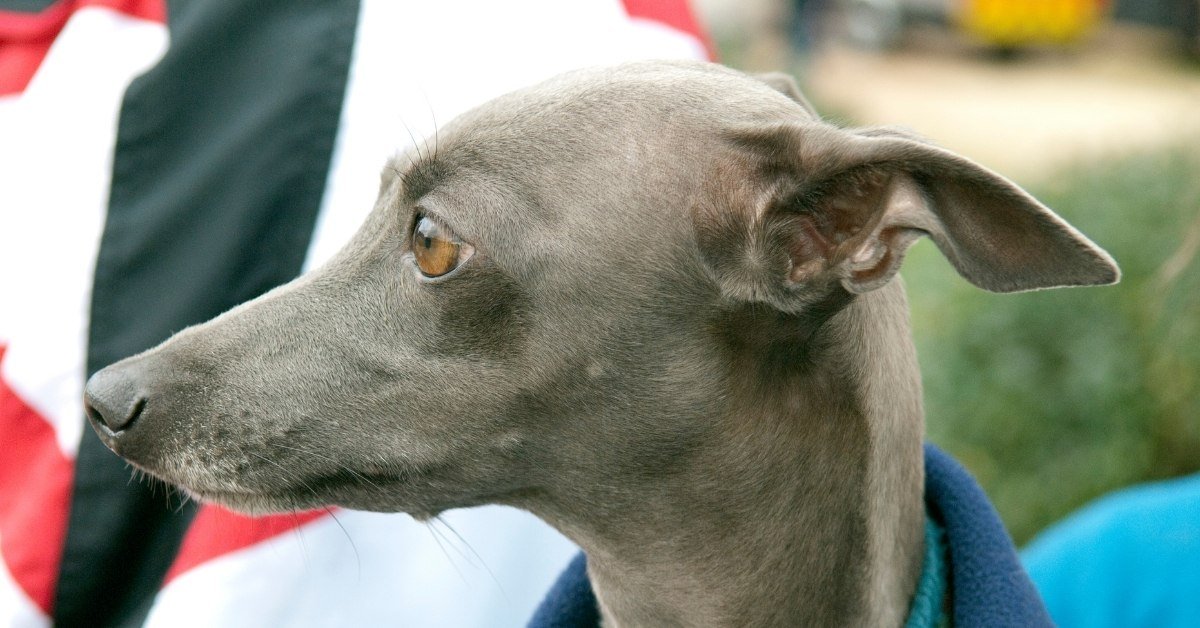 Chattering is a form of communication. They might use chattering to tell you something or to communicate with other dogs too. The most common reason is that they’re happy or content.

Your greyhound teeth chattering will look like a typical human shiver. You’ll be able to see their bottom jaw moving up and down rapidly physically, and you’ll hear the click of their teeth. You can also feel the chatter of their teeth when you’re patting their head.

Because a greyhound’s teeth look similar to human bottom teeth, except for their canines, it can even look quite amusing.

Diagnosing exactly why your greyhound’s teeth are chattering can be a challenge, so here’s every possibility and what to look out for.

You’ll notice this when they’re sleepy or chilled out at home, and it’ll most likely be when they’re cuddled up to you. It’s a massive compliment, as your greyhound is enjoying the bond you have.

If your greyhound is laid out in a relaxed position, their chattering may be accompanied by a tail wag. It might be that they’re just settling down to sleep with you or that you’re petting them in just the right place.

You might also notice this if you have multiple dogs. They’ll use this behavior as a signal that they’re happy with each other too and that there’s no danger around.

If this happens when your greyhound is just meeting a new dog or other pet, it could be a good thing, showing that they’re happy with the stranger and feel comfortable with them around.

The ‘contented chatter’ should always be accompanied by tail wagging and open, inviting body language.

Keep doing exactly what you’re doing. Your greyhound is loving the attention or is enjoying their time with the other pet.

Chattering can also be a sign of excitement. This might occur just before a walk, when you get home from work or if you’re in the middle of a play session.

Your greyhound will have a wagging tail, open and active posture, and might even be crouched low to the floor in a pouncing position or rolling on their back if they’re expecting belly rubs.

When your greyhound is excited, they may jump up at you if they’re not adequately trained. This, coupled with teeth chattering, could appear quite intimidating. But it’s just their way of greeting.

Teeth chattering because your greyhound is excited is a good sign; it means that they’re enjoying themselves. However, some of the other symptoms of excitement could be bad.

They need to understand that teeth chattering is acceptable but jumping around and causing chaos isn’t. Turning your back and ignoring your dog when they do that will quickly and gently teach them that the behavior doesn’t get them the attention they’re asking for.

Nitting is the common practice of teeth chattering against someone’s skin. Greyhounds are well known for this, and it gives the sensation of a very slight nip. They won’t draw blood, but it can cause bruises if it happens often.

Nitting isn’t like biting. It’ll be clear that your greyhound isn’t trying to hurt you. You won’t experience any growling or barking beforehand and no aggressive behavior.

There isn’t much research regarding nitting and why it might occur. However, based on your dog’s body language, it seems that greyhounds nit when they’re being affectionate or possibly when they’re feeling anxious and need your attention.

Nitting in itself isn’t anything to worry about from your greyhound’s perspective. However, it could become off-putting or annoying especially if you have guests, and might even be concerning if you have young children.

There are a few ways that you could deal with nitting:

Because teeth chattering is primarily a communication method, your greyhound might be trying to tell you that they’re hungry.

This usually occurs if you have set mealtimes and you happen to be late with their food for some reason. It might appear while you’re standing in the kitchen making your food too, as it’s a sign that your dog feels you’ve forgotten them.

If you are a little late with their food, then you’ll need to feed them as soon as possible to keep to their routine.

However, if your greyhound is chattering because they see you eating your food, you shouldn’t give them food just because they’re displaying this behavior.

This will encourage them to chatter their teeth every time they see something they want, assuming that the chattering is why you gave it to them.

Teeth chattering could be a sign that your greyhound wants your attention. It’s sweet that they want to be near you, and this behavior could be seen as affection, as they value the time you spend together.

It could also happen if you’re sitting relaxing and your greyhound feels that you’re chilling a little too much and that you should be spending that time petting them.

Spend some time with your greyhound. They deserve your attention, especially if they’re chattering their teeth rather than jumping up at you or barking.

They’re asking in the politest way possible. Take them for a walk or snuggle up and watch TV together.

Teeth chattering can also be a sign of fear or to alert you to danger. This may happen if you’re out on a walk and your dog sees another dog that they don’t like or is worried about something that’s in front of them.

Instead of the friendly, polite teeth chattering that you’ll be used to, the chattering will get louder and appear more aggressive. Their stance will change so that their head is lowered and their feet are further apart. The chattering may even turn into a growl.

Walk away from the thing that’s bothering them as soon as you can. Getting closer to something that’s upsetting them will only make the situation worse. Turn around until they feel more comfortable.

Greyhounds suffer from separation anxiety. It’s recommended that you don’t spend more than 6 hours at a time away from your greyhound or get them a friend so that they’re not alone during the day.

When you’re out of the house, they worry that you won’t come back or worry about having to protect the home while you’re not there.

Chattering can become a nervous habit if this is the case and may even bleed into the time that you spend together when you are home. The more anxious they are when you’re out, the longer the anxiety will last after you get home.

Your greyhound will likely sit in a corner and be noticeably less friendly while they’re chattering. You might even notice a loss of appetite and other changes in normal behavior.

Chattering because they’re anxious will display as a constant habit, and they’ll gradually become jumpy and may start to avoid you.

Don’t confuse this behavior with the teeth chattering that occurs when your dog runs up to you when you come home from work. This is generally through excitement as they’re happy to see you. Genuine anxiety will cause your dog to become more reclusive.

Crate Training – Putting your greyhound in a crate while you’re out gives them comfort as they have a smaller area to protect. If they only need to look after the immediate area that they’re sitting in, they won’t feel as much pressure.

Dog Sitting – If you’re going to be out for a long time regularly, it’s a good idea to get a dog sitter to look in on them during the day.

Walking – A long walk just before you’re about to leave them alone will help to tire them out, so hopefully, they’ll sleep for most of the time that you’re gone.

Overall, teeth chattering is entirely normal behavior. However, it would help if you tried to look at the other behaviors that your greyhound displays while the teeth chattering is occurring. This will help you diagnose if there’s a broader problem to deal with it at the source.