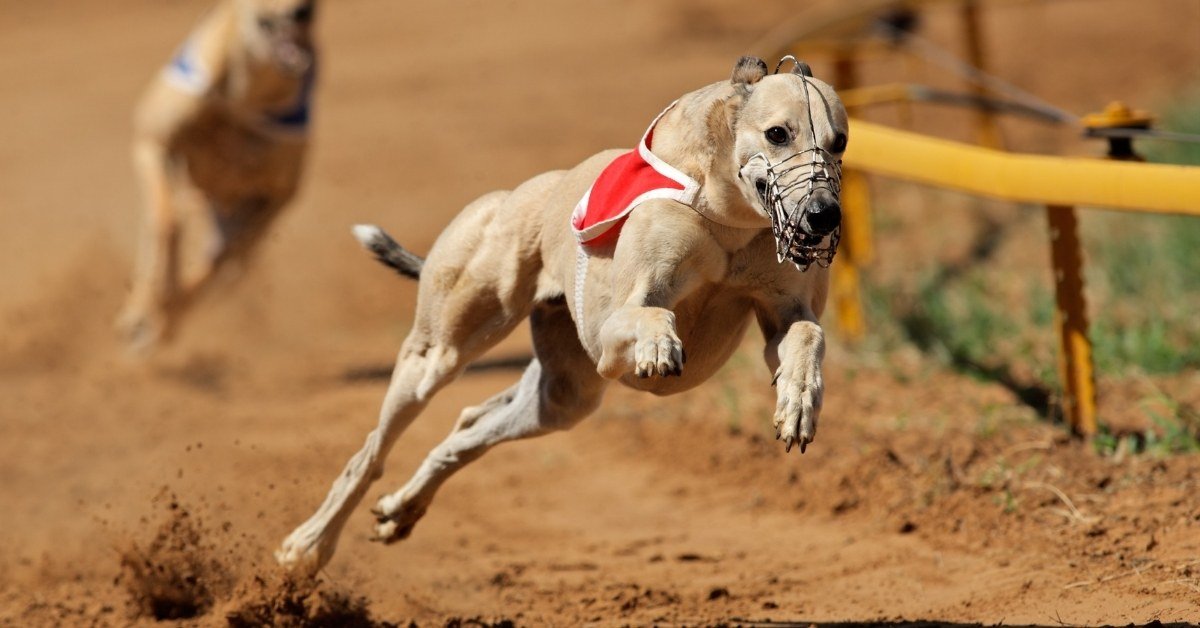 It’s common to see greyhounds with muzzles while they’re out on a walk. These muzzles do perform a valuable function when you have such a large dog. It’s normal to feel put off by a muzzle because you think it’s restricting your greyhound.

Muzzles may also make people believe that your dog is dangerous. However, that’s not the case; muzzles are an excellent idea for many other reasons.

Why Should Greyhounds Wear Muzzles?

Greyhounds that are still of racing age should wear a muzzle to prevent them from getting too carried away with their chase instinct. Although they aren’t aggressive with people, they may feel too excited after a race and take playing too far.

(Read all about greyhound aggressiveness.)

Muzzles are a great way to minimize the licking and biting of stitches or wounds after an accident or veterinary treatment. They’re an alternative to the cone collars that you see other dogs wearing.

To keep that slim physique, greyhounds have to have a particular diet. While you’re out on a walk, they might be tempted by junk food, trash, or items that they absolutely shouldn’t eat that they find scattered around on the floor.

A muzzle prevents them from eating things that they shouldn’t.

As with most dogs, greyhounds probably won’t like the vet. Their anxiety in the veterinary surgery may cause them to act differently, and your vet will find a muzzle beneficial to conduct a thorough examination without the fear of being bitten.

While you’re out in the park, your greyhound is likely to meet lots of other breeds of dog – many much smaller than themselves.

If your greyhound wants to play, a muzzle ensures that they don’t get too carried away with other dogs (especially small ones) and gives other owners peace of mind.

Muzzles can help significantly with training. When you first take a greyhound into your home, they may not be aware of home etiquette.

They’ll have likely lived in a kennel for their entire lives until this point if they’re a retired racer. In this former life, certain behaviors will have been acceptable, which you might need to put a stop to.

Muzzling your dog during training will help develop that respect between you and them and allow them to see you as the pack’s alpha.

Introducing your greyhound to other pets in the household could be tricky. Although greyhounds are generally friendly with other dogs, you could have initial teething problems if you have a small dog or cat.

Based on their instincts, your greyhound is likely to see them as prey rather than their family at first. Having a muzzle safeguards against accidents if your greyhound feels the need to chase your cat.

Do Greyhounds Have to Wear Muzzles in Public?

Your greyhound doesn’t have to wear a muzzle in public if you don’t want them to, especially if they’re retired from racing.

The law changed in the US and UK in 2019 so that greyhounds that are retired from racing can walk without a muzzle as long as they’re leashed.

There are some exceptions to this rule though, depending on the country you’re living in, so it’s best to check out the specific laws before you go ahead.

If you intend to let your dog off the leash, it’s best to keep them wearing a muzzle. This is because off-leash areas tend to be places where your greyhound might chase prey animals.

While they’re outdoors, their chase instinct is intensified, and something as small as a blowing leaf or stray piece of trash will activate their need to catch something. The last thing you need is to have your greyhound being able to catch rabbits while you’re on a walk.

A muzzle not only physically stops them from catching prey but becomes a sort of mental reminder for them that chase behavior isn’t acceptable and keeps them mentally restrained, even if they’re off the leash.

Retired greyhounds are known to be calm, affectionate, and sweet-natured dogs who aren’t prone to aggression.

Although they are large dogs and might seem intimidating to some people, they’re mostly gentle giants. Unless your dog has a known behavioral issue, you shouldn’t need to worry about them biting anyone.

Do Racing Greyhounds Have To Wear Muzzles?

This is because, when they race, their bodies are pumped with adrenaline to keep them active and able to chase down prey.

A muzzle helps protect the other dogs in the race and stops fights from breaking out if dogs don’t get along. As greyhounds are pack animals, they run as a unit to chase down the prey, and the muzzle allows them to focus on the task rather than each other.

Immediately after a race, you might find that the greyhound is more mentally stimulated and excited, potentially making them more aggressive if someone approaches them.

Muzzle-wearing is mostly about practicality for dogs off the race track. However, surprisingly, a muzzle also helps the judges of the race. All greyhounds race wearing muzzles.

It’s compulsory, not just to protect the other dogs, but because it’s difficult to see, even on a camera, whose nose is first across the line.

Greyhounds run in a pack, so there’s never usually a massive difference between the first and last dog in the race like there would be with horses. Specialist greyhound muzzles allow the judge to see precisely where their nose ends and helps the judge determine the winner.

No, you can buy specialist greyhound muzzles that are padded around their nose, equipped explicitly for comfortably fitting their long snout, and are lightweight, so your greyhound may not even feel them on there.

Greyhounds that are retired from racing will also be used to wearing a muzzle, so they won’t see you as the bad guy.

When racing, their owners would have put a muzzle on them until they’d calmed down from the adrenaline of the race to keep other dogs and owners safe.

Retired greyhounds may even see the muzzle as comforting, as it’s something they’re used to, in contrast to the new environment that they’re introduced to when they come into your home.

Why Did Greyhounds Have To Wear Muzzles In Australia?

In Australia, a law in 1927 stated that all greyhounds must wear a muzzle when in public even if they’re retired from racing. This was to protect other dogs and people that they work with on the track.

It was thought that a greyhound’s chase instinct couldn’t be deactivated, and they would always have the desire to catch and kill. Unfortunately, this law is still in place.

However, greyhounds tend to retire at around two years old and make fantastic pets afterward. The ‘pet lifestyle’ is a new thing for them, but they are pretty adaptable.

When they’re in your home, greyhounds are incredibly affectionate and actually quite lazy. While they maintain their chase instinct when they’re off the leash in wide-open spaces, they’re not ordinarily aggressive in the home or outside on a leash at all.

This rule changed however in 2019 where pet greyhounds no longer need to be muzzled, as long as they are leashed.

Racing greyhounds must wear muzzles while they’re on the track and immediately afterward. However, if you have a retired greyhound, you can be confident that your dog will be safe to be around most of the time without a muzzle.

It’s still recommended to pop on a muzzle if you’re planning to let them off the leash in the park to protect rabbits, squirrels, cats, and other smaller dogs from their natural chase instinct.