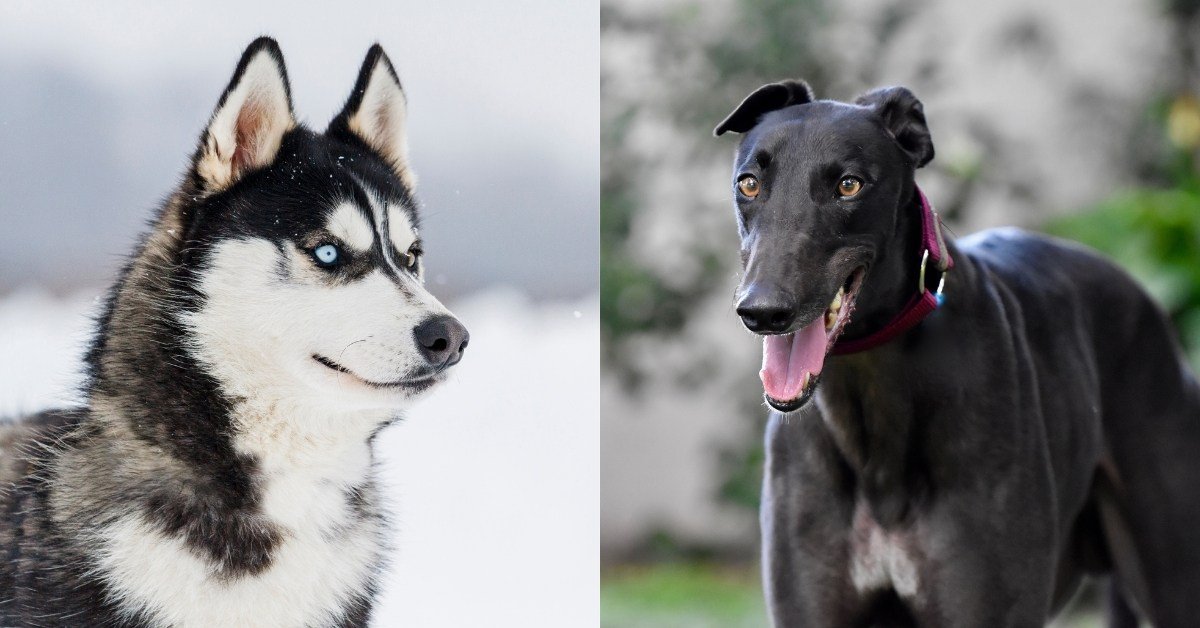 And like any best friend, it’s important that you select the right one for you and that you’re aware of all the care and exercise that they’ll need so you can provide a loving forever home.

Well, maybe that’s a bit of a weird analogy. But, mixed breeds can be awesome best friends, but there’s a lot to know about each one.

So, let’s find out what you should know about the Husky Greyhound mix!

Greyhounds were originally bred to be hunting dogs. Their prey drive, developed from their hunting background, means that they’re great for racing too.

They have a slim-lined figure to help them with aerodynamics and short, fine fur to keep them streamlined.

They’re very sociable dogs – hunting in packs and love the company of other dogs or people.

A Bit About Huskies

Huskies were originally bred to brave the harsh climate of Siberia and pull the sleds of the locals.

They have large paws which help them keep their balance in the snow and they are very loyal and friendly – often keeping their owners warm during the winter nights.

A mix between a Greyhound and a Husky is most often called a Grey Houndsky. It’s one of the more unusual Greyhound mixes since both breeds are so different from each other.

However, they actually mix really well together and Grey Houndskies make excellent pets.

You can never guarantee how much of each parent is passed down to the puppies though, so they can be a little unpredictable in size and appearance.

Overall, they’re an excellent dog to have for families.

Both Huskies and Greyhounds love children and are loyal and playful pets, so most Greyhound Husky mixes would be hyper friendly and loving too.

However, while Greyhounds are typically quite lazy, Huskies are full of beans and have a lot of energy to burn.

This means that you’ll need to be prepared for a couple of longish walks every day and you should have a home that’s large enough to support their active nature.

Despite their boisterous nature, a Greyhound Husky mix is typically very gentle and conscientious when it comes to small children and you can be sure that they’ll look after them when running around.

Despite their suitability with young children, Greyhound Husky mixes aren’t the best if you have small animals such as rabbits or guinea pigs and probably aren’t the best fit for households with cats either.

This is because Greyhounds have a natural chase instinct, bred originally for hunting.

When they’re around smaller animals that need to run around, they will need to chase them and this could end in disaster.

Greyhounds are prone to anxiety if they feel abandoned and this can cause destructive behavior such as furniture chewing or sofa destroying.

These traits can be passed down to your Greyhound Husky mix if you don’t train them properly and get them used to being alone at an early age.

To avoid these behaviors developing you could:

The size of a mixed breed, like everything else, is unpredictable because you just don’t know which genes would be more dominant.

However, it’s sensible to assume that your dog will be somewhere in between the two dog sizes, and there isn’t a big difference.

Huskies are typically around 2ft (60cm) at the shoulder when they reach adulthood, whereas greyhounds can reach up to 2.3ft (70cm) for an adult male.

Either way, you’re destined to end up with a large dog. So make sure you have ample space to accommodate them.

The coats of Greyhounds are incredibly fine and short. This makes them more aerodynamic on the track. However, a Husky’s coat couldn’t be more different.

Huskies have long, fluffy fur that covers their whole body, meant to keep them warm in cold weather.

This means that your Grey Houndsky’s coat will be a little unpredictable. You’re most likely to come out with a dog that has fur somewhere in between.

It will be coarse and thick – meaning they’ll be able to withstand cold temperatures easily, but not quite as long as a pure Husky.

One thing that is certain though – they will shed. Make sure you’re fully equipped with a small hoover, as you’ll have to run around after them cleaning up.

While greyhounds come in any color imaginable – (Black, white, grey, brown, brindle, and any combination you can think of) – Huskies are primarily white, usually with a black, grey, or light brown back and head.

This means that your Grey Houndsky is likely to be mainly white with some black or grey patches.

Unless your dog’s genes are heavily weighted toward the Greyhound when it comes to pigmentation, you probably won’t get a brown or brindle dog.

Your Greyhound Husky mix will need to be brushed almost every day with a soft-bristled brush.

They shed a lot of fur and any dead fur must be removed as soon as possible. Make sure you’re prepared for a lot of stray fluff flying about.

Your dog will likely have large, pointy ears, taking this feature mostly from the Husky, and will have longer, slimmer, and more nimble legs than a Husky, losing a lot of their sturdy, muscular appearance.

Their bodies will also be much slimmer than a Husky, losing some of their natural body fat that would normally keep them warm.

Overall, the most likely look of your dog will be a very tall, thin Husky.

As the Greyhound Husky mix is a relatively new crossbreed, it’s difficult to pinpoint any specific health issues.

Their overall health tends to be based on their direct lineage and the health of their parents.

Greyhounds are particularly susceptible to dysplasia in the hips and elbows. This is when the sockets of their elbows or hips are worn away by the bones being slightly displaced.

It causes pain and soreness when walking and is more common when the dog gets older.

Greyhounds and other sighthounds are also prone to bloat (also known as GDV). This is when the stomach becomes twisted and the dog has painful gas that they’re unable to expel.

This can be resolved by taking your dog to the vet, but once it’s happened once, it may be a recurring issue.

Because of the high energy levels from the Husky and the fast metabolism coming from the Greyhound, your Greyhound Husky mix will need a high-carb diet.

There are specific foods that are high in carbohydrates, designed specifically to give your dog all the vitamins and nutrients that they need and keep their energy levels high.