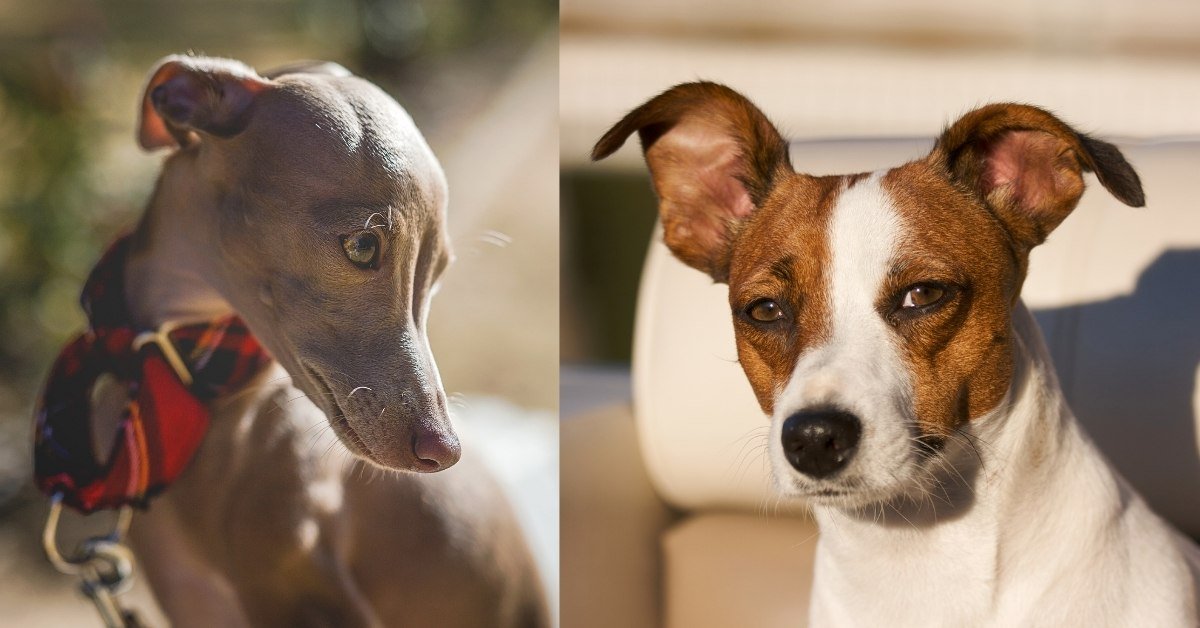 Crossbreeding greyhounds with other breeds are becoming more common because people want the Greyhound’s personality traits but with a smaller dog or a dog with more energy.

Usually, to achieve their unique appearance, Jack Russells are mixed with Italian Greyhounds, which are a smaller version of the standard Greyhound.

A Little Bit About Jack Russells

He had a passion for fox and otter hunting but struggled with the larger Beagles and Otterhounds if their prey was to disappear down holes.

In the late 1800’s he decided to breed the smaller Jack Russell, which had the same fierce temper but was small enough to follow into the holes to catch game. They come in a few different sizes and shapes.

They’ve been used for ratting more recently – being able to dive down burrows of pests and vermin or even rabbits.

They can range from 10-17 inches in height, and their coats can be smooth-haired or wire-haired, depending on the breeding.

Jack Russells have excitable personalities; they’re very playful and intelligent and can be pretty loud when they get excited. They’re also fearless and outgoing for such small dogs.

They make good pets for people with a busy lifestyle, as they are pretty independent and they live for up to 16 years, so there’s plenty of time to create a bond.

A Little Bit About Italian Greyhounds

Italian Greyhounds are a selectively bred breed taking almost all of the traditional Greyhound aspects from Egypt and decreasing the size over the generations.

They weigh between 6-10 lbs. in adulthood and only grow to around 15 inches at shoulder height. They’re the smallest of the sighthound family that Greyhounds belong to.

Their body build is like a Greyhound, sleek and slender with fine, smooth coats. They have loving and chilled-out personalities and are known for being quiet dogs who are easy to care for.

However, they suffer from separation anxiety and are quite high maintenance in comparison to Jack Russells – they’re great with children, but not the best if you plan to be away from home a lot.

(Read the full article about greyhounds – in a new tab.)

What To Expect From A Jack Russell Italian Greyhound Mix

Appearance-wise, they tend to look a lot more like Jack Russells than Greyhounds. That’s because coloration is normally the dominant gene passed down from the mother.

In most (but not all) of these mixed cases, Jack Russell is the mother, and the Greyhound is the father. This means that they’ll probably have the Jack Russell standard white and tan coloring.

However, the body stature is more likely to come from the father, giving them longer legs than a Jack Russell and a sleeker build with smooth fur and a thin face.

Be aware that this isn’t always the case, and although you can guess what they’ll look like when they’re older, you’ll never know for sure at the puppy stage.

As with any mix, you can’t be entirely sure what you’re going to get.

You could end up with the best traits from both parents; a dog that has the independence of a Jack Russell so you can leave them alone more often, but has the affectionate nature of a Greyhound when you’re around.

Alternatively, you could end up with a dog with barking issues and a chase instinct – making walking in the park a nightmare every time they see another dog.

It’s essential to understand the personality traits of each of the parents. Breeders tend to use dogs with blander personalities – nothing that stands out too much. This ensures that there are no surprises when you take your new pup home.

Jack Russells have considerably fewer health issues to be concerned about. However, if you’re getting a Jack Russell Greyhound mix, you’ll need to consider that your puppy might be prone to health issues from both breeds.

Due to their breeding, Italian Greyhounds are prone to the following health issues:

Because both breeds are known for their intelligence, they can be a little tricky to train. Jack Russells are notorious for their independence and want their own way.

However, the Greyhound aspects in their personality mean that they aren’t impossible to train, just a little more complicated.

They’ll need you to be firm, patient, and consistent with any training you give, and they work well on a rewards basis.

Punishment training never really works with this breed, but they enjoy being challenged and having new experiences if there’s a reward at the end of the line.

Both breeds have quite short fur, so you won’t need to take them to the groomers very often. If you’re lucky, you might get a mix that’s closer to the Greyhound gene when it comes to shedding.

Although Greyhounds aren’t technically classed as hypoallergenic, they shed so little that their fur is normally unnoticeable. However, Jack Russells do shed much more and need to go to a groomer once a month.

Your dog’s type of coat will determine how often you need to pay for a groomer. However, brushing once weekly yourself should keep the coat at a healthy length.

Greyhounds have very little energy because of their high metabolism, so they sleep for most of the day. This means they only need to walk for 40 minutes per day collectively.

However, Jack Russells are generally a bundle of energy and require three walks per day to keep their energy levels down.

Until you get a good feel for your dog’s energy levels, it’s best to go for three short walks a day. Judge how tired your dog is after this. If it’s too much and your dog is overdoing it, you can reduce this.

Try to take them to an open space where they can run around, rather than on a long hike. This gives the dog more control over its exercise levels.

This will need to be worked out on a weight basis, depending on how large your dog is. They don’t need a special diet but may need increased fish oil and glucosamine to help with joint pain and dysplasia.

Unfortunately, due to the Jack Russell aspects of their personality, this breed rarely gets on with cats or other animals in your household, although other dogs should be fine.

Their chase instinct coupled with their instinct to catch animals in hiding could make life exceedingly difficult for your cat.

Where Can You Get A Jack Russell Italian Greyhound Mix?

To ensure you get the right mix of the two breeds, it’s perhaps safer to go to a specific breeder. A breeder should have certificates for their expertise and have proper information on both dogs’ parentage.

They’ll also offer a health guarantee for you to show that they trust the lineage of the puppy and that there shouldn’t be any surprises waiting for you.

Make sure that you go to a reputable breeder and that you can see both parents before you take the puppy home.

When these mixes are puppies, they’re much more likely to look like a Jack Russell than a Greyhound, so you need to make sure you know what you’re getting.

Although both breeds are loveable dogs – they do require particular care. A good mix from a competent breeder could set you back $300-$500 depending on the parents.

You may be able to pick up a mix from a shelter, but any left there are generally by accidental breeding, meaning you won’t know their background.

Hence, it’s impossible to predict their final size, appearance, or what care they’d need later on.

The Jack Russell Italian Greyhound mix are great dogs. They’re small, affectionate, and playful with intelligent and unique personalities. They can take a little time to train properly and will require some patience.

Because they’re a mixed breed, you can never 100% guarantee what your dog will look like as an adult, but you can be assured that you’re getting a versatile and loving addition to your family.