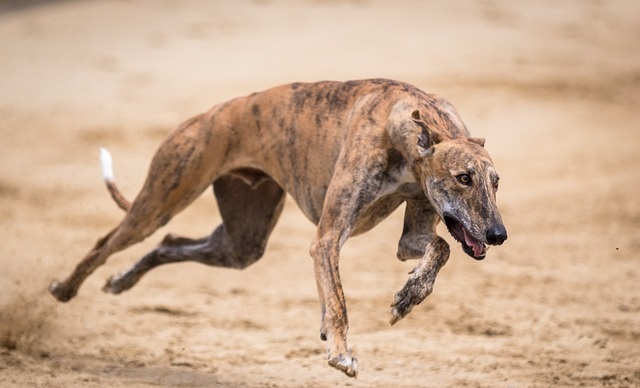 If you’re on the hunt for your new best friend, then look no further. The Rampur Greyhound would make an amazing pet and fit in really well with the family.

Also known as Rampur Hounds or Indian Greyhounds, Rampur Greyhounds were originally bred in Rampur, India, just in between Delhi and Bareilly.

They aren’t exactly Greyhounds, though are easily mistaken for them. They are a sighthound and do look very similar, but in fact, the Rampur Greyhound is a mix of the English Greyhound and the Afghan Hound.

The Rampur was originally bred by the Maharajas of India to hunt and kill jackals, tigers, and leopards, working in packs to chase them down, hence their need for speed.

When selecting the best dog breeds for your home, you need to understand the dog’s personality and needs to help you find the best fit.

The Rampur Greyhound is known to be a loyal and companionable breed that is very protective over its family. Although they are bred to chase, they actually fit in amazingly with children and love a chilled, relaxed lifestyle.

They can also be fiercely protective, as the trait was bred into them to protect their masters from predators. Their Greyhound roots also give them a huge chase instinct. For this reason, they probably wouldn’t be a great fit for homes with other animals – although they work well as part of a pack, so other dogs are normally fine, as long as they are introduced properly.

To the untrained eye, a Rampur Greyhound might just appear to be a standard, English Greyhound, but there are some subtle differences.

They have shorter, more pointy faces than Greyhounds, taking on some of the Afghan Hound’s features. They also tend to be a little shorter in stature than a Greyhound and have slightly smaller ears.

Despite these differences, they still have the same slim physique as a Greyhound with short coats to make them more aerodynamic when running and their fur comes in all colors, from solid black, brown, or grey, to brindle or spotted.

Rampur Greyhounds crave attention and love, but dog care is actually minimal with this breed, they are fairly independent. They actually don’t need much exercise, despite their roots. A couple of 20-minute walks per day are fine as long as they can run freely. This is because they’re sprinters, and typically use all of their energy in a few minutes. Afterwards, they need to sleep it off on the sofa with you for the rest of the day.

The Rampur Greyhound is a pretty healthy breed with a life expectancy of up to 14 years.

The males can reach anything from 24-30 inches when they’re full grown and weigh up to 65 pounds, whereas females are much shorter at a maximum of 24 inches tall, but still, weigh around 60 pounds.

It’s important to consider the right dog food and the right dog food feeding regime with a Rampur. Because of their body structure, it can be difficult to digest food. Their stomachs are also quite small in comparison to other dogs. If the Rampur is fed too often, too much, or fed immediately before a walk, they might be prone to bloating. This can have severe consequences for their future digestion.

Just like Greyhounds, their coat is very fine, meaning that they easily get cold. They could be prone to hypothermia in the winter, so it’s important that they always wear a coat. But equally, their thin coat exposes them to sunburn and sunstroke too. You should always go for walks first thing in the morning or last thing in the evening to minimize their exposure to the hot sun. To give them the best chance of fending off skin problems, a dried food diet that’s rich in vitamin A would be the most effective.

The breed is also hyper-sensitive to anesthesia, meaning that your vet may be warier about putting them under for an operation. If this is the case, you may need to pay a little extra for your insurance.

What is the Speed of Rampur Greyhound?

Just like traditional sighthound breeds, the Rampur Greyhound can travel at speeds of up to 40 mph.

Named sighthounds originally because they were fast enough to catch prey on sight. They don’t need to rely on their sense of smell or hearing. Instead, to stalk down the prey, they can simply outrun anything they see.

For this reason, they were used in packs to chase down larger animals such as tigers. However, if they see a squirrel while out on a walk, you might want to make sure you practice their recall, as you won’t see them for dust.

What is the Price of a Rampur Greyhound in India?

Rampurs are still incredibly popular in India today, which is why they are still known as the Indian Greyhound. Their coats and lazy attitude perfectly suit the heat of the Indian summer, as long as they have plenty of shade and water.

In India, a Rampur Greyhound can be picked up for as little as Rs 10,000, which is around $130. However, it’s difficult to find a reputable seller where all the puppies are healthy. There is also a risk of overbreeding if you purchase in India. Some sellers may sell puppies as a quick money-making scheme.

To round up, Rampur Greyhounds are amazing pets. They’re fun, loyal, and great with children. They don’t need too much exercise. However, they will need enough space to run around in the yard when you’re not out walking.

The one downside is that you will need to check that the greyhound puppies have come from a reputable breeder. If your dog does have a health scare, it’s common for the pet insurance to be quite high due to their negative reactions to anesthesia.