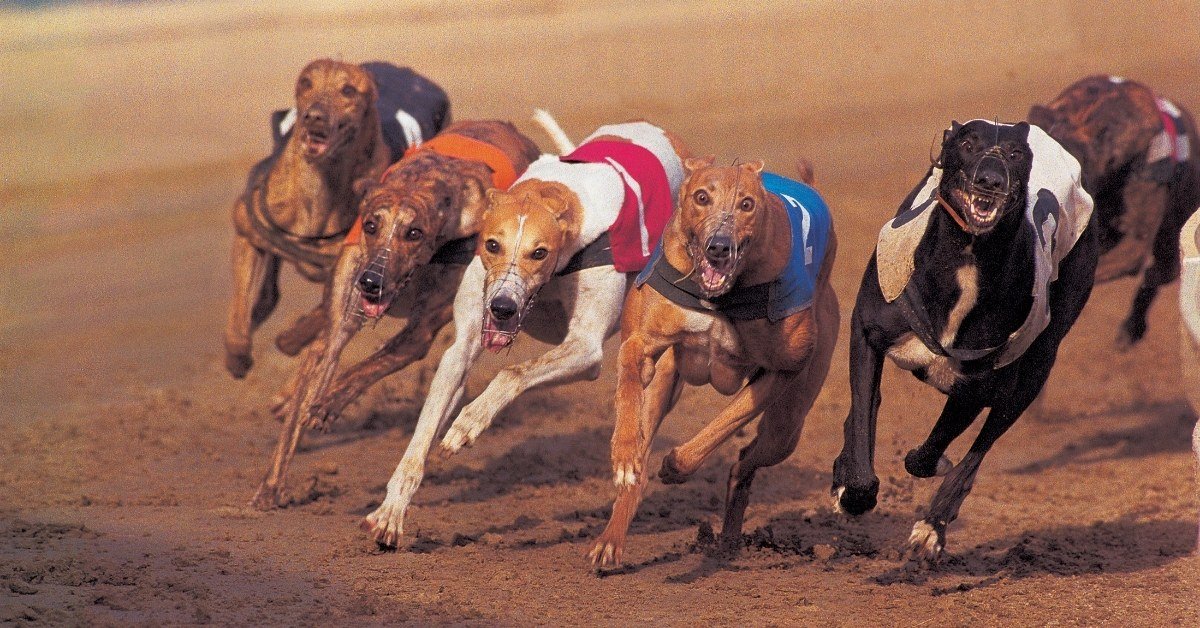 Giving a retired greyhound a home is a great idea. Despite their previous working life, they make fantastic household pets.

Many people are put off getting a retired greyhound as they feel that they’re missing out on a massive chunk of their lives.

The word ‘retired’ implies that the dog is in the later stages of life, and many owners (justifiably so) don’t want to bring in a dog only to say goodbye shortly after.

However, that’s not the case. Greyhounds retire after just a couple of years of hard racing, so you have plenty of time to spend together afterward.

How Long Do Retired Greyhounds Live?

Greyhounds generally live for between 10-14 years. However, they usually retire from the racetrack at around 2-5 years old because racing is hard work and younger dogs are faster and more robust.

So, at 2-5 years old, when they come into your family, you can expect 8-12 more years together.

Retired greyhounds are usually still young when they come into your home, so the care their need is relatively similar to every other greyhound.

However, you will need to keep an eye out for specific health issues as racing can cause muscle and joint problems later in life, depending on how well they were kept as racers.

You’ll also need to consider their mental health. Retired greyhounds will have spent most of their life before you in kennels with their immediate family. Usually, a whole litter will grow up together, making them incredibly sociable.

And, greyhounds can suffer quite severely from separation anxiety when left alone, which is only exacerbated if you have a retired racer, as they will be used to the constant company of other dogs.

You might want to think about getting two dogs at the same time to ease their transition.

Common Health Issues To Look Out For In Retired Greyhounds

Racing dogs go through a strict selective breeding process to ensure that the owner always has the fastest dogs to put out on the track.

Unfortunately, this has led to hereditary health issues passed down through gene pools that aren’t quite wide enough.

Studies have shown that retired racing greyhounds are prone to approximately 34 more health issues than other dogs or none racing sighthounds.

Let’s go over them.

Greyhounds have very little fat on their bodies, and their hair is very short and fine. This is intentional as it makes them more aerodynamic. However, it also means that they get cold very quickly.

Make sure you always put a coat on them when they’re out walking, and look out for shivering, lethargy, and lack of appetite.

As sighthounds, greyhounds have great vision, but as they get older, it starts to fade. As this is the primary sense that they rely on, it can cause other issues, such as stress or aggression.

Retired greyhounds will have been used to an extremely high-calorie diet. They need all the calories they can get to burn off during the race.

However, when they move into your home, their diet will change as they won’t need the same amount of food – otherwise, you’ll end up with an extremely overweight greyhound.

The high-calorie diet may cause some dental issues, so you’ll need to make sure you always keep their teeth perfectly clean to avoid fast deterioration.

A racing greyhound puts lots of stress on their joints to get them around the track as fast as possible.

Over-racing or racing a dog that wasn’t fit enough could lead to longer-term joint and bone problems. Ensuring they have a rich diet with fish oils will help ease any pain before it gets worse.

It’s easy to wear down claws when you’re running around the track. But sleeping at home on the couch won’t have the same effect.

You’ll need to keep on top of their claws and ensure you get a dog nail file to keep them at a reasonable length.

Falls aren’t too common in dog racing, but they can happen. If a greyhound falls at high speed, this can cause trauma to the head, legs, or hips.

Keep an eye out for any strange movements, signs of pain or discomfort, or any odd behaviors. If you notice anything out of the norm, get a check-up at the vet.

A high-calorie diet is great for a racing greyhound, but many people make the mistake of keeping them on the same diet when they get adopted because they want to avoid upsetting their stomachs.

Unfortunately, the pet lifestyle isn’t the same as their racing one, and they won’t burn the calories as quickly on their two short walks per day. It’s easy for them to start gaining weight if they can’t burn it off.

Bringing A Retired Greyhound Into Your Home

Remember, greyhounds that were used to racing won’t have been family pets before. This means that they won’t be used to being in a home.

It’s more likely that they’ll have lived in kennels for their whole life. This can pose a few problems, but don’t worry, they’re easy to overcome with patience.

Your retired greyhound won’t be used to living in a home, so things like windows, mirrors and soft furnishings may seem alien to them. It’s best to introduce them to the family gradually and on a leash.

It can be scary, and they’re prone to anxiety (read more about it). You don’t want to push too much on them too soon. A few visits to your home before they move in completely will help.

Getting Along With Cats And Dogs

As racing dogs, the only other animals they’ll have encountered are other racing greyhounds. While retired greyhounds are affectionate and loving dogs, it may take them a while to get along with a cat or dog.

(See our guide on how to help greyhounds and cats get along.)

Bear in mind that your new greyhound may never have had to be toilet trained before. If they’ve lived in kennels for their whole life, pooping where they eat and sleep will have been the norm.

That said, sleeping in a kennel has the benefit that they’re easy to crate train, so toilet training shouldn’t be too much of a leap.

However, you will need to be prepared for a few accidents when you first bring the dog into your home.

How Much Does A Retired Greyhound Cost?

Generally, purchasing a retired greyhound from a former racing owner would only cost around $325.

Essentially, once the greyhound is done racing, the owner will try to sell up quickly to leave space for younger dogs. Sadly, it’s rare for the owner to keep retired dogs as family pets afterward.

Some racing owners may even take their retired dogs to specialist retired greyhound shelters. The Greyhound Trust rehomes over 4000 retired dogs annually.

Adopting a dog from there can mean varying prices, but usually, the shelter is happy to take a lower price to see the dogs sent to a good family home.