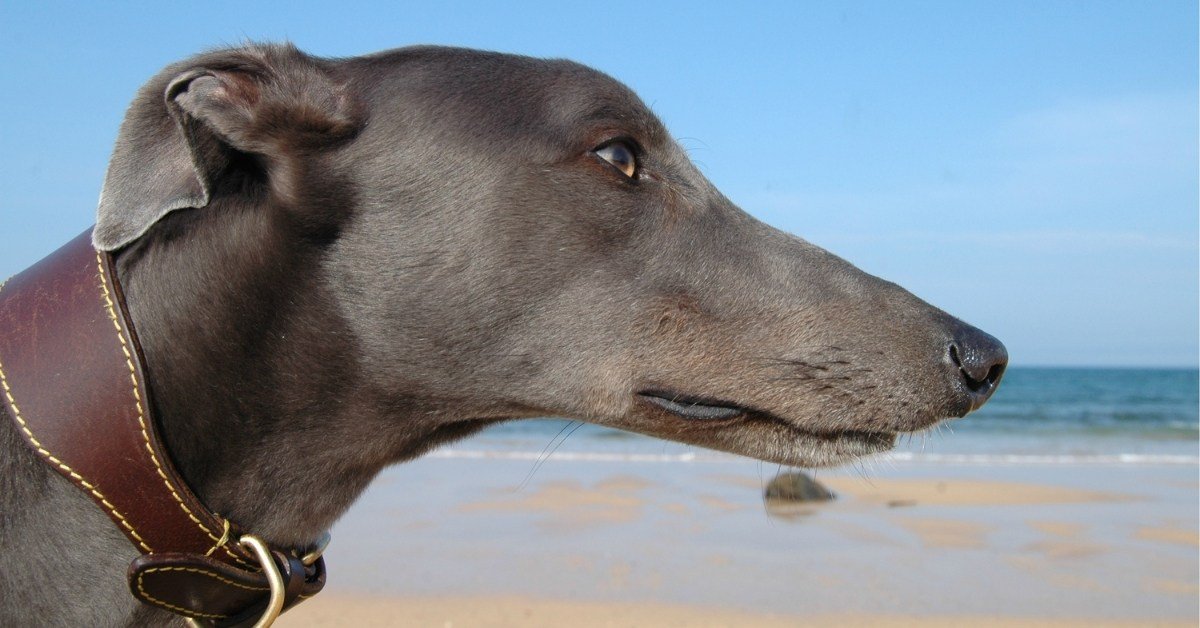 The Greyhound, a type of sighthound, is one of the oldest dog breeds on the planet. The evidence suggests that they originate from the middle east.

It’s believed that the Egyptian pharaohs used these alongside Salukis (another type of sighthound) for hunting.

So What Are Blue Greyhounds?

The most unique and important thing about this type of Greyhound is that it is created by a dilution gene.

Therefore, you might actually have a blue Greyhound that doesn’t have a bluish-colored coat at all, but just a blue nose.

You can find two types of “blue” Greyhounds, these include the blue fawn Greyhound and the regular blue Greyhound.

The regular blue Greyhound gives the impression of an almost metallic blue-grey sheen. Whereas the blue fawn has the same tones as a regular fawn but with an added blue tint.

Are There Any Defects Or Complications With Blue Greyhounds?

Dogs that have dilute pigments, mainly blue dogs, may develop a condition known as color dilution alopecia. It occurs in various breeds and happens with the Blue Greyhound as well.

This condition will be noticeable between 6 months and 3 years of age where the dog will begin losing hair especially from areas that have diluted pigment.

It doesn’t always happen, of course, but you have to be ready for it when getting a Blue Greyhound.

Note: it has no effect over the wellbeing of your dog.

The blue Greyhound, like any Greyhound, makes an excellent family pet.

Despite them being generally known for racing, they are actually very laid back and don’t require much maintenance at all. You could argue they are quite lazy dogs!

Most Greyhounds retire from racing quite early on around 3-4 years old so they have plenty of time to adapt to a relaxed family life.

A common misconception is that people believe they cannot adopt a Greyhound due to it requiring far too much exercise. But, one or two 20 minute walks per day are enough.

How Rare Are Blue Greyhounds?

Blue Greyhounds are considered to be one of the rarest. This is due to one of the parents needing to possess a unique recessive gene that really can’t be checked for beforehand.

And, even if this gene is present in at least one of the parents, it’s not always guaranteed to receive a blue color when the offspring is produced, since genes work much like the lottery.

Are Blue Greyhounds Blue Or Gray?

The “gray” Greyhound is not actually gray but is more a deep blue color.

This makes it a bit difficult since when people speak about Blue Greyhounds, the color ranges from a deep blue (gray) which is almost black, to a pale, smoky blue.

However, true Blue Greyhounds will have a deep bluish-colored nose.

Greyhounds that are categorized as true blue, blue brindle, or blue fawn can sometimes be grouped into an overall category called “blue variant.” They are not the same as gray.

How Much Do Blue Italian Greyhounds Cost?

However, if the dog possesses show ability, then the prices may be considerably more. You may need to seek out a specific breeder to get your hands on one of these.

You’ll have to consider two other things to understand the costs involved in purchasing an Italian blue Greyhound:

The lineage of the dog. If your puppy’s parents are purebred show winners, then your new blue Greyhound is likely to cost more.

Results of the health check. A health check is always important before you purchase any dog. You should always ask your breeder for proof of a clean bill of health.

If your chosen puppy has any marks against their health check, then they’re likely to come a little cheaper.

What Is The Rarest Greyhound Color?

Whilst it is a big debate, one of the rarest colors in Greyhounds is actually gray due to their strong and rare dilution gene.

Most of the other rare Greyhound colors are also linked in with the dilution, such as the Blue Greyhound we’re talking about.

Which Greyhounds Are Most Common?

Read all of this and decided a Blue Greyhound just isn’t for you? Well, don’t worry.