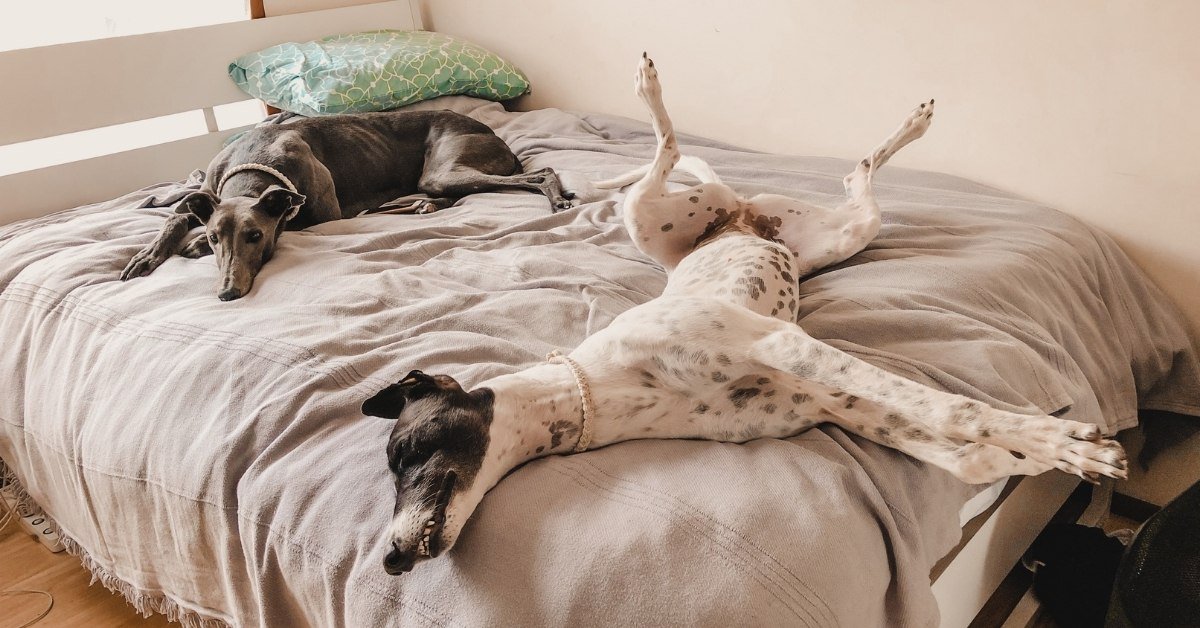 Roaching is a sleeping position that many dogs use when they’re entirely comfortable with their surroundings. Roaching is when the dog lays on their back with their legs up in the air and its belly exposed.

While it’s a cute position, it can look a little odd due to the length of their legs, and some greyhound parents might find it a little alarming at first. But don’t worry, it doesn’t mean anything bad.

Let’s go over everything you need to know about greyhound roaching!

Why Is It Called Roaching?

Roaching is the simple term for the position as it looks like a dead insect on its back. The term ‘roach’ is short for cockroach.

Because of the position’s sinister connotations for insects, it can make owners think that their greyhound is unwell. However, it’s typically quite the opposite and means they’re comfortable and content.

Why Do Greyhounds Roach?

Roaching exposes the greyhound’s stomach, leaving them open to attack if they were in a more dangerous situation.

The fact that they’re comfortable enough to expose their most vulnerable parts to you means that they’re absolutely relaxed in your presence. They trust you and feel at ease when you’re around.

With such long legs, it could be challenging to find a comfortable position to lay in. Roaching allows them to get their legs out of the way and truly relax in comfort without having to shift around to find a better position.

The greyhound roaching position doesn’t always happen during sleep. As it’s a comfortable position for them, you might catch them doing this when they’re relaxing while awake or even just before playtime.

The roach position is a hangover from puppyhood, where they would wrestle with their siblings and use their legs as a tool in play fighting.

If your greyhound is roaching while they’re relaxing with you on the couch, it could be because they’re hinting that they’d like some attention. Roaching exposes their stomach, meaning they’re in the perfect position for belly rubs.

Because of a greyhound’s body type and fine, short fur, they can be sensitive to heat or cold temperatures.

Like most other mammals, the underside of their body is the hottest side. It’s where their major organs are and consequently, where the blood vessels are closest to the skin’s surface.

Roaching allows your greyhound to cool itself down by letting some heat escape and expose their organs to cooler air.

Similarly, if it’s cold, you’ll often find your greyhound curled up in a ‘normal sleeping position.’ This helps them to retain and recycle their body heat.

One of the apparent reasons for the roach position is as a way for your greyhound to scratch their own back.

When they’re doing this, you’ll spot the normal roach position, usually accompanied by a wag of the tail and a wiggle. This is just so the floor beneath them hits the right spot.

How Often Do Greyhounds Roach?

It’s a myth that greyhounds need lots of exercise and are active all the time. In fact, they’re pretty lazy and can sleep for anywhere between 16-18 hours a day.

Around 20% of this sleep time will be in a roaching position, so you’ll often see it, especially in young greyhounds.

The rest of the time they will lay on their sides – pushing their legs out to the side or curled up in a ball like other dogs.

These are also completely normal positions for a greyhound to lay in, so don’t be alarmed or assume there’s something wrong if they change positions regularly.

Why Do Greyhounds Need To Sleep So Much?

Greyhounds, along with other sighthounds, need much more sleep than other breeds of dog. This is because their body build doesn’t allow for much fat storage, and their metabolism is incredibly fast.

This means that they need to sleep for a long time to recover their muscles after running and to conserve energy for their next burst of speed.

Greyhounds also suffer from stress and anxiety, especially in new environments or when being left alone.

(Read my full article about greyhound anxiety in apartments.)

Although this anxiety can be controlled by keeping their minds occupied and giving them reassuring company, sleeping can be a way for them to relieve stress.

Crate training is also a great way to control separation anxiety in greyhounds as they don’t feel the need to protect the whole house while you’re gone – they focus on their small area.

If you have a crate-trained greyhound and you’re out of the house a lot, they’ll likely sleep for most of the time that you’re gone, reserving their active hours for you when you’re home.

However, it can be difficult for them to roach while in a crate due to the size of the area. If your greyhound is in a crate a lot, they’re less likely to roach as they’ve learned that it’s not its natural sleeping position.

Do Other Breeds Of Dog Roach?

Roaching isn’t limited just to greyhounds, but not all dogs roach.

You’ll see the sleeping position most often with sighthounds (greyhounds are a part of this group) and larger dogs, but it’s rarely seen in smaller dogs or dogs with a different body type.

Sighthounds are dogs that are similar in appearance and stature to greyhounds, such as whippets, salukis, or Afghan hounds.

They get their name because they’re built for chasing down prey with speed, using their exemplary vision to see their prey and be fast enough to catch it.

Scent hounds or other breeds of dog differ here, as they usually use scent to track and stalk the prey, getting as close as possible before making their move as the prey would outrun them over longer distances.

Sighthound’s long legs and slim body type make them aerodynamic enough to catch prey, but it also means that their legs are more impractical for laying in a normal position with their legs folded underneath or out to the side.

Small dogs with shorter legs can easily get comfortable in other positions by folding their legs up.

Should I Worry If My Greyhound Doesn’t Roach?

Not all greyhounds roach, so if yours doesn’t, that’s fine. Usually, roaching is a sign that your greyhound feels comfortable and secure in their surroundings. It will take your greyhound some time to feel this way.

If you have a retired greyhound, it may take much longer to get into the roaching habit. As racing dogs, they won’t have been exposed to a comfortable home-like setting until they retired and came to you.

If they previously lived in a kennel, they won’t have had the opportunity to roach as much, as it’s unlikely they’d be used to a plush, fluffy carpet like the one you have in your home, so roaching won’t have become a habit.

When they first enter your home, it’ll be a new, alien setting for them. They won’t understand mirrors, windows, the hoover, and or your cat.

Although the anxiety of their new surroundings will reduce eventually, it’s natural for them to feel a bit out of their depth initially. Roaching will start to develop more frequently as time goes on, and they’re surer of themselves.

So, when greyhounds roach, it’s completely normal behavior, and it’s a compliment to you too. Clearly, your greyhound feels at home and comfortable with you.

And if your greyhound doesn’t roach, it’s nothing to worry about, it may take them some time to get into a routine that they recognize and feel relaxed in. Roaching will probably develop as they get older.