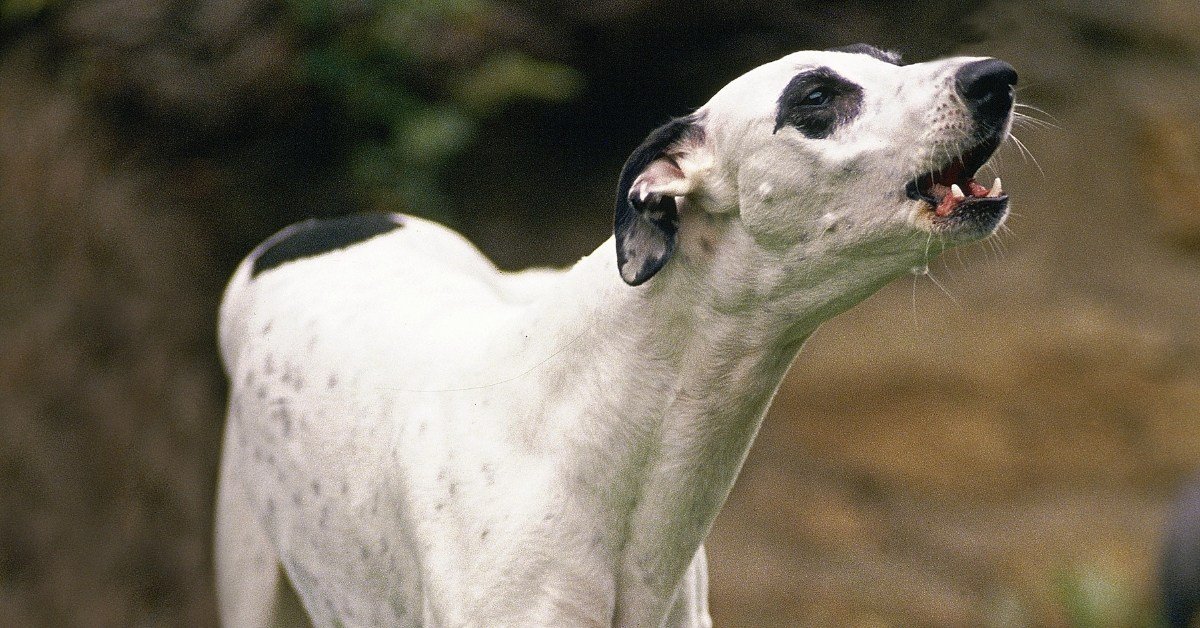 Greyhounds can bark, just like any other breed of dog, but they are known for being incredibly quiet. They will mostly bark to communicate their emotions when they feel that they can’t communicate physically.

They are very pleasant dogs, and even with other members of their ‘pack,’ they usually use body language as communication rather than sound.

However, there are some occasions when your greyhound might feel the need to communicate verbally. It might be that they need to get your attention, make you aware that they’re upset or in pain, or that they’re just too excited that they can’t contain their emotions.

While barking can’t be considered a bad thing, as it’s only a communication method, there are ways that you can control a barking greyhound if you take the time to understand their language.

Do Greyhounds Bark At Intruders?

Greyhounds might bark at intruders, but it’s generally because they’re excited to see a new person rather than alerting you to danger.

Greyhounds aren’t good watchdogs. They’re incredibly loving and friendly dogs and will be quick to make friends with anyone. If you have an intruder, your greyhound will most likely run up to lick them rather than chase them away.

So, Do Greyhounds Protect Their Owners Homes?

Well, although greyhounds are keen to protect the area they have, they mostly want to make sure you’re safe. This means that if they feel you’re safe, they’re usually okay with trespassers.

If someone enters your home to steal your TV and your greyhound feels a threat, it’s more likely that they’ll come to check that you’re safe than try to fend off the intruder.

They aren’t heroes, and they won’t put themselves in danger to protect your belongings and normally won’t bark to scare the intruder off, but if the intruder does come towards you in an aggressive manner, they will protect you.

So Why Do Greyhounds Usually Bark?

Getting too excited is one of the main reasons all dogs bark, and greyhounds are no exception. They are creatures of routine and will know precisely when you’re due home from work or when it’s time for a walk.

At these times, especially if they occur at the same time each day, you might experience a short influx of excited barking.

While greyhounds aren’t natural barkers, they can be influenced by other dogs that are. If you have more than one dog, they can influence your greyhound, creating a barking habit.

Greyhounds have a chase instinct, meaning they’ll chase rabbits, birds, and squirrels while you’re out walking. Chasing is fun for them, which is why they love racing so much. The excitement from the activity might make them bark.

Greyhounds are very friendly dogs and can thus suffer quite severely from separation anxiety if they’re left alone for long periods. If they aren’t kept occupied throughout the day or get lonely, they can start barking, which is a sign of distress.

If this is the problem, you’ll typically find that those who live close to you let you know that your dog is barking during the day while you’re out, even if they always seem quiet when they’re with you.

What Should You Do About A Greyhound Barking

Barking is a completely natural behavior for any dog, whether it be because they’re excited or scared. So stopping the barking itself isn’t a primary concern.

However, if the reason for barking is because your dog is unhappy or if they get over-excited, you might need to tackle the problem (not tackle the dog!).

Greyhound Barking Due To Over Excitement

Excitement is usually a good thing. Greyhounds might bark when you come home as they’re just excited to see you. While it’s great that they’re happy, your neighbors might have other opinions.

You want to encourage the excitement but limit the barking, and as the alpha of the pack (hopefully), you’re in the perfect position to put in some training to restrict this.

Your dog always wants your approval and attention. If they start barking when you walk through the door, the fastest way to remove the behavior is to ignore them.

Giving them attention will make them more excited and essentially reward them for barking. Simply walk through the door and ignore their barking until they calm down.

It helps if you turn your back on them while they’re barking. This emphasizes to them that they don’t get your attention while they’re making noise.

Turn around and give them attention all the attention once they’re quieter. And, if the barking starts back up again once you’ve turned around to praise them, turn your back again.

Turning your back each time you hear a bark will teach your greyhound to associate your attention with them remaining calm and quiet. And since they’re such an intelligent breed, they’ll pick up on that quite quickly.

Most people’s automatic reaction when their dog barks is to shout at them to be quiet. But, dogs interpret your shout as you barking with them. Shouting encourages them to bark more as they think you’re joining in.

Also, in general, shouting should always be the last resort.

This is taking the association training one step further. Reward your dog with treats while they’re quiet and take away the treats when they bark.

This training may require some patience and might take you a few weeks to perfect, but once they’ve learned that being quiet gets them attention and treats and barking means that you ignore them, they’ll soon stop.

Although greyhounds aren’t natural barkers, living with other barking dogs can encourage them. When you start this training, make sure any other dogs in your household go through the same thing. If not, your greyhound will regress to barking behaviors later on.

Barking Due to Anxiety

Greyhounds are prone to separation anxiety if they’re left alone for too long (I go over this in detail here). This could result in excessive barking to get others’ attention or just because they’re feeling insecure.

If this is the reason for the barking, it’s likely to be accompanied by other signs of anxiety.

If you think your greyhound is feeling stressed or anxious while you’re not at home, there are a few things you could try:

Dog Sitter – Getting someone to come in and spend time with your greyhound during the day should ease their anxiety as they aren’t alone for such a long period.

Interactive Toys – Toys such as kongs or self-moving balls help to keep your greyhound occupied while you’re not there. The toy’s interactive aspect replicates how you play with your dog, meaning that they won’t get bored. This distraction should limit barking.

Crate Training – Greyhounds like crates because they give a smaller space to protect than a whole house. They naturally feel responsible for their area when you aren’t there, so having that smaller space as a responsibility helps ease their anxiety.

Walks – A long walk before you leave your greyhound releases endorphins which make them feel uplifted. This allows them to get all their excited barks out in one go and means that they’re more likely to sleep when they get home, removing the anxiety and, consequently, the barking problem.

What Other Noises Do Greyhounds Make & What Do They Mean?

If you notice any of the following signs, your dog is likely whimpering because they’re ill and feel uncomfortable.

Take them to the vet immediately, especially if there’s no apparent external injury, as it may be something more serious.

Howling is a dog’s way of communicating with its pack. Greyhounds don’t howl very much, and because they’re such friendly dogs, they tend to communicate physically rather than verbally.

If your greyhound is howling, it could be a sign of distress. They could be calling for their pack to help them out. This will most likely happen when they’re left alone and might be feeling trapped.

The techniques used earlier to handle separation anxiety should resolve this.

Most people think that only cats purr, but dogs can too, and greyhounds are especially known for purring. In the same way as cats, they purr when they’re happy or content. You’ll notice a low rumbling that you might be able to feel in their chest when you’re petting them.

Growling is the reaction to feeling threatened or angry. The growl from a greyhound is relatively high-pitched, and you might also notice bared teeth. Luckily, greyhounds are normally very calm and affectionate dogs, so growling shouldn’t happen too often.

Whining is usually a more extended version of a whimper, and it tends to signal that your greyhound is hungry or wants your attention.

Again, this is the kind of noise you want to avoid, and the same training that was put together for barking will need to be implemented so that your dog knows whining about something doesn’t get them their way.

Although greyhounds normally don’t bark much and are usually incredibly quiet, there are a few occasions that might spark them to become more vocal.

Because of their intelligence, they are easy to train out of this behavior, making greyhounds one of the best breeds of dogs to have if you have neighbors close by.