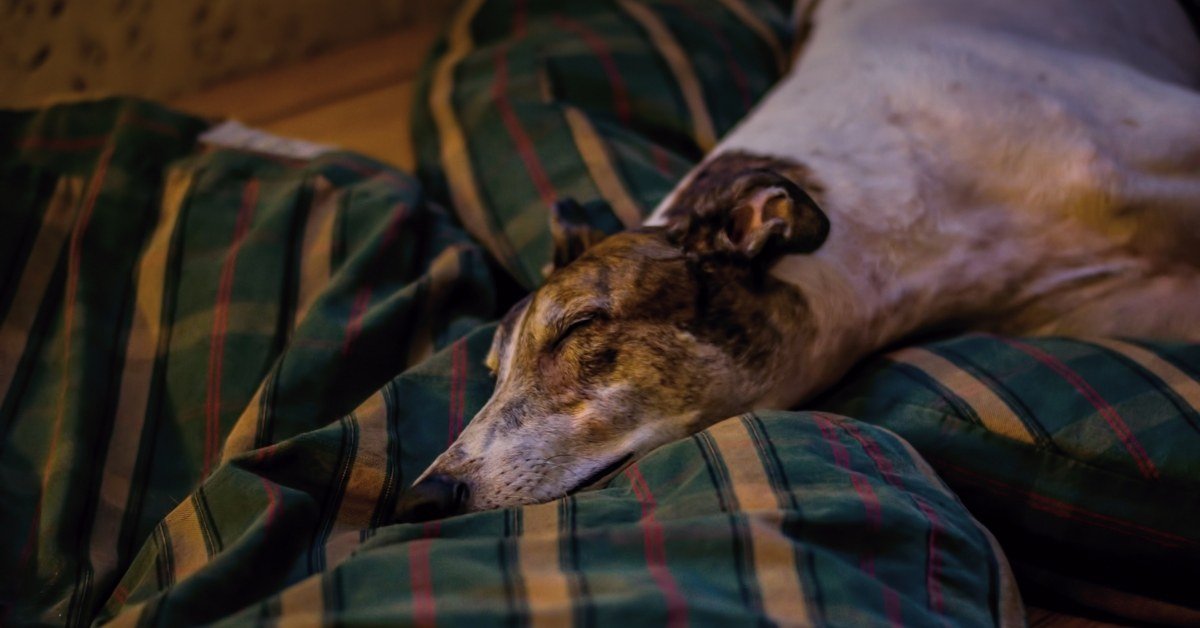 Greyhounds need a lot of sleep as the calories they ingest from their food are used quickly when they run. To function after a short exercise session or race, they need to conserve as much energy as possible.

Their personalities are also quite lazy, despite their natural affinity for sports, and you’re much more likely to find a greyhound that wants to sleep in than one with bags of energy begging to go for a walk.

How Many Hours Do Greyhounds Sleep?

Greyhounds usually sleep for between 16 and 18 hours per day. Brief 20-minute walks and food typically break up their sleeping pattern.

You might even find that they sleep for slightly longer in the winter too, as it takes them longer to recover their energy in colder temperatures.

Despite their 16-18 hour sleeping time, they aren’t in full REM sleep for the entire time. They have a deep sleep cycle of just 20 minutes before they wake up gradually and fall back to sleep again.

Humans have a deep sleep cycle of 90 minutes, meaning we briefly wake 5-6 times during our standard 8 hours.

Comparatively, greyhounds would wake up 24 times within that period, so they naturally need much more sleep than us.

Why Do Greyhounds Sleep In Weird Positions?

Greyhounds often sleep in a position affectionately named ‘roaching.’ This is where they lay flat on their backs with all four legs in the air – much like a dead cockroach.

It’s a perfectly normal position for sighthounds, or dogs with longer legs, although it can seem quite alarming for new greyhound parents that haven’t seen them do it before.

It’s just because it’s the most comfortable position for them. Their long legs make it difficult for them to tuck themselves up like shorter, stockier dogs.

It also allows them to cool themselves down on hotter days, as their skin and fur are thinnest on their underside, exposing their blood vessels next to their vital organs. Letting the air get to their belly cools their blood faster.

(Read more about greyhound roaching – in a new tab.)

The ‘collapse’ pose can also look a bit scary. It essentially looks precisely as it sounds. Your greyhound will lay on their side with all four legs stretched out to the side.

This allows them to get comfortable without their long legs getting in the way. It’s not uncommon for your greyhound to stand up from sleeping on one side, turn around and immediately flop down on the opposite side.

It’s just to keep themselves comfortable and make sure the blood flow is consistent around their bodies.

Why Do Greyhounds Sleep With Their Eyes Open?

It’s usually nothing to worry about, and it’s entirely down to individual personality, so you might have one greyhound that sleeps with its eyes open and another that doesn’t.

A greyhound’s instinct is always to be alert if they don’t feel entirely comfortable in its surroundings. Sleeping with their eyes open can be a defense mechanism to remind people around them to be cautious.

It’s also a sign that their brain isn’t completely asleep, meaning that you won’t be able to sneak past your dog even if they’re sleeping, as their brain will still register your movement.

Both dogs and cats have a third eyelid inside their outer eyelids called the nictitating membrane.

Although your greyhound’s eyes might look like they’re partially open, they can keep this membrane closed across the eye.

It’s transparent, so you wouldn’t notice, but it allows them to keep dust away from their eye and stops the eye from drying out.

What Does It Mean If A Greyhound Sleeps Too Much?

If you find that your greyhound is sleeping more than the normal 16-18 hours a day, the first thing to do is understand the cause.

Sleep is a great healer, and if your greyhound is sick, it might start to sleep more to recover.

You should check your greyhound over for signs of injury or ill health. If you’re worried, take a trip to the vet to see if you can get a diagnosis.

There are a few conditions that could cause your greyhound to sleep with their eyes open:

This could be because they’re anxious about being away from you at night.

If your greyhound sleeps in a different room, it’d be a good idea to leave an item of clothing or blanket that smells like you near to their crate. This gives them a feeling of closeness and relieves their anxiety.

Crate training is almost always a must with greyhounds. They sleep much better knowing that they have a small space to retreat to that’s their own.

Being prone to anxiety, if they’re left to sleep wherever they like, they could feel like there’s a much larger space to protect that’s prone to more danger – which will keep them awake.

Lack of sleep during the night can also be due to companionship. It’s always best to keep a greyhound with another dog, as they love company.

Greyhounds get along with others of the same breed incredibly well, and they’ll usually cuddle up and sleep together.

However, if you have a greyhound living with a different breed that has more energy, they’re likely to spend most of their time playing with each other.

That means that your greyhound isn’t getting their total 16 hours and is having to make up for it during the day when you’re home.

This might look to you like they’re sleeping more often, when in fact, they’re just sleeping at different times.

This is similar to the human version of epilepsy, but their seizures won’t usually be violent or even visible. If your greyhound has epilepsy, it’ll typically lie down on the floor with its eyes unfocused but open.

They’ll be unresponsive for a few minutes and won’t even come to the sound of your voice or the smell of food.

It may look like they’re sleeping with their eyes open if they’re mid-seizure. The condition can’t be cured but can be controlled with medication.

Greyhounds, like all animals, require more sleep as they age. It helps them to repair their cells and conserve energy.

It’s completely normal and natural for your greyhound to sleep more as they come to the end of its life. Greyhounds usually live for between 10-14 years, so excess sleep is normal if they’re approaching this age.

Greyhounds have fast metabolisms, meaning they must consume a lot of calories to keep up their energy levels.

If you find that your greyhound is sleeping a little too much, it could be because they aren’t eating enough, so they haven’t got enough energy to stay awake.

However, it could also be because the food that you’re giving to them doesn’t have the right amount of protein, fiber, and vitamins that they require.

Switch to a higher-quality food, possibly with a higher calorie count. It might boost their energy levels.

Greyhounds typically require 2-3 short walks per day. They aren’t great with stamina, so each walk should be around 20 minutes.

If you’re taking your greyhound for longer walks than this, it may be that they’ve just used up too much energy, and they’re tired out. Try switching to a shorter walk for a while to see if their sleep pattern improves.

Greyhounds are sufferers of mental health problems. They get anxious very quickly if they’re left alone for too long. It’s recommended to never leave your greyhound for more than 6 hours at a time.

If you notice excess sleeping, destructive behavior, barking, whining, or excess shedding, it may be because they’re anxious.

Greyhounds also suffer from depression, in which case you’ll see an increase in lethargy, even when you’re at home with them. Their personalities might also become more reclusive.

To fix this, you might want to adjust your schedule so that you’re home more or employ a dog sitter to visit your greyhound during the day for a short walk and play session.

Some greyhounds suffer from an overactive thyroid. This is usually a hereditary trait passed down through breeding. It means that the calories they’re eating are being wasted even when they’re not expelled through energy.

You can pick up medication from your veterinarian for this – but it’s likely to be a lifelong treatment.

Excessive heat can make them feel drowsy and change their sleep pattern.

If you have your thermostat turned up too high or the fire on too often, this can increase the amount of time that your greyhound sleeps, just because they’re nice and comfortable.

Crate training is an excellent idea for a greyhound. They love sleeping in smaller spaces as it makes them feel secure.

It also helps to relieve separation anxiety when you’re not at home. However, you need to ensure that you let your dog out when you’re at home.

Because your greyhound is crate trained, they’ll associate the fact that they’ve been sent to the crate as their sleep time.

If you leave them in the crate when you’re in the house, they’ll most likely continue to sleep as they think that’s what they’re supposed to do.

There’s always the possibility that your greyhound is just lazy. Despite popular belief, greyhounds aren’t naturally active dogs. They’re built for short bursts of speed rather than stamina and get tired quickly.

Most of the time, they’ll lay around on their bed with their legs in the air (roaching) and not moving at all. That’s completely normal and doesn’t necessarily mean that there’s something wrong.

What Not To Do

It can be worrying if your greyhound starts to sleep with their eyes open. However, it’s usually nothing to worry about and is completely normal.

If you begin to notice your dog extending their sleep time, it’d be a good idea to rethink your exercise regime and potentially put in a night-time camera to watch their activities while you’re asleep.

If you’re noticing issues with their sleep pattern, there might be something going on in the home that’s stressing them out.