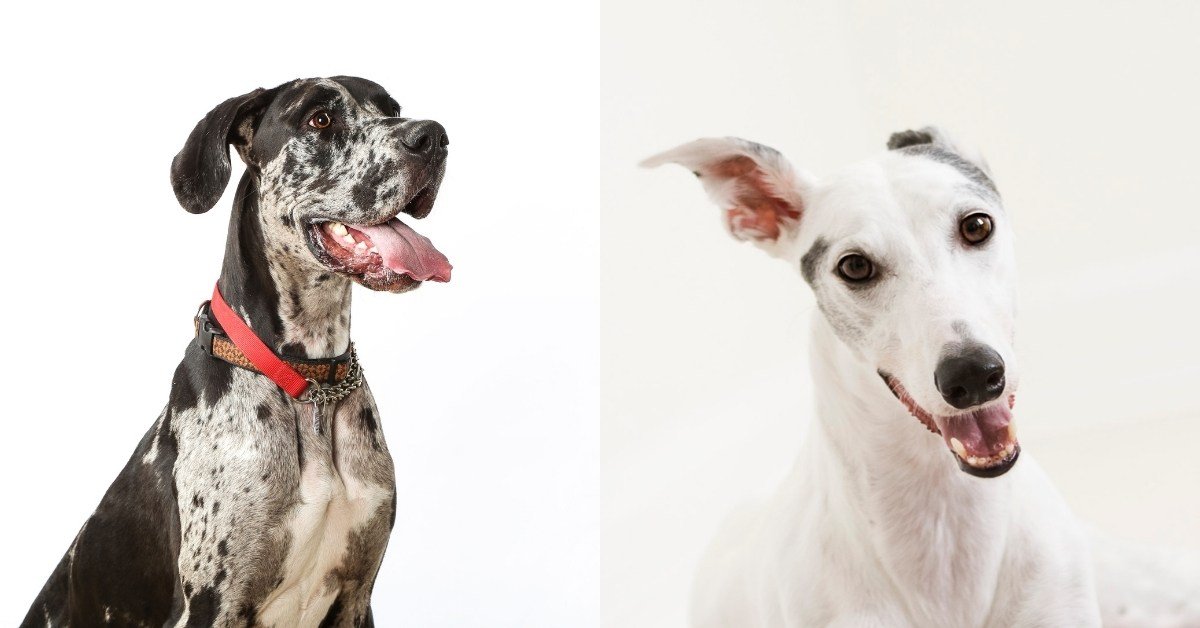 Committing to having a big dog around your home isn’t something you should take lightly. You need to make sure you’ve done all the research to get the breed that’s perfect for you.

And, the truth is, pedigree dogs aren’t always the solution. Sometimes a mix of two breeds gets you the perfect blend of personality and looks.

So, what about a Great Dane Greyhound mix? Well, I’ve done some extensive research, so let’s find out!

Greyhounds are track dogs, but they aren’t always on the track. Once they’re retired, they’re cuddly, loving, and actually quite lazy dogs.

They’re great to have around children as they’ll spend most of their day laying around conserving energy ready for short, high-intensity walks/runs around the park.

Their chase instinct reduces the longer they’ve been away from racing.

However, it’s never advisable to keep a greyhound in the home with a small animal or even a cat, as there could be disastrous consequences.

They’re known for being quiet dogs, barely ever barking.

This means that they’re not too good at being guard dogs either as they get attached to people quickly and are more likely to lick a burglar to death than attack them or alert you.

A Bit About Great Danes

Great Danes are the largest dog breed but are known for being gentle giants.

They get on well with children and other animals and will gladly spend their days cuddling up in front of the fire.

However, while Great Danes are amazing pets from a personality perspective, they do require a fair bit of maintenance.

Their bodies are so large that it can put a lot of strain on their organs which typically gives them a much shorter life expectancy than other dog breeds.

Their size can also cause issues with living arrangements. They won’t make good apartment dogs, as apartments are simply too small for them to move around comfortably.

It’s not because of their temperament, which is generally very placid, but because they may simply get too excited and knock you, your stuff, or your children over.

Walks can also be incredibly challenging with a dog this big who you don’t trust to follow your instructions.

We’ve discussed how both Great Danes and Greyhounds make amazing pets from a personality perspective.

So what’s to lose from welcoming a mix of the two into your home?

Both Greyhounds and Great Danes are incredibly sociable dogs and love to be with people. They are very affectionate and you may even struggle to get some alone time.

They’ll likely follow you all over the house and want to be with you every second, so there’s no shortage of love.

They also get along with other dogs quite well as they’re bred to be hunters, so they’ll be happier in a pack.

Overall, you can expect your Greyhound Great Dane mix to be extremely friendly and sociable!

As both dogs were bred to hunt smaller animals, their prey drive is quite strong.

While Great Dane’s prey drive has been bred out of them in recent years, making them into the gentle giants we know today, the prey drive in Greyhounds is still encouraged to make them better racers.

As you’ll never know which genes your puppy has, you should never risk putting your Great Dane-Greyhound mix in the same room as a small animal or even a cat.

A small pet running around could trigger their instinct and cause them to chase and even kill.

It’s also advisable to keep them inside if a cat is outside. The prey drive increases in larger areas, due to their instinct to run off the energy they’ve accumulated.

It should be obvious that by picking a dog that’s a mix between two of the largest dogs out there, you’re going to end up with a giant.

Great Danes can measure anything up to 34 inches at the shoulder and weigh up to 200 lbs.

Greyhounds are slightly shorter at 30 inches and much lighter. This is due to their bone and muscle structure at around 88 lbs.

Mixing these two means that you’ll end up with a dog that’s somewhere in between.

Equally, you could end up with a pooch that takes after one side for its size, making it the full 34-inch, 200 lb monster.

Whichever parent your dog takes after, you’re going to need a home with a lot of space. This means that small apartment living is probably not the best option for them.

Both the Great Dane and the Greyhound have short coats that come in all different color variations, so your mix’s color can be anything.

When it comes to length, the coats of Greyhounds are very thin, which means that they don’t have much protection in cold weather.

In both cases, you’ll probably need to get your Greyhound Great Dane mix a winter coat, and, equally, not take them out in the blazing sun, as they can get burnt.

Your Great Dane Greyhound mix will only need to be brushed once a week with a soft-bristled brush. Don’t use hard bristles as this may damage their skin.

Despite the short fur, you will need to be prepared for it to be all over your home. Great Dane Greyhound mixes tend to shed, so a good hoover is a necessity.

Great Danes typically have a shorter life expectancy than other dogs, reaching 7-9 years on average.

This is because their sheer size puts a lot of strain on their organs, meaning they need to work much harder.

Other than that though, (which potentially won’t be a problem if your mix gets its size from their Greyhound side), Great Dane-Greyhounds are typically a healthy mixed breed.

However, you will need to look out for hip dysplasia or arthritis as they get older.

You should take your Great Dane-Greyhound on two or three short walks every day, allowing them to run around in an enclosed field area.

While these dogs are fast, they don’t have a great deal of stamina. A single run for 20 minutes will likely tire them out.