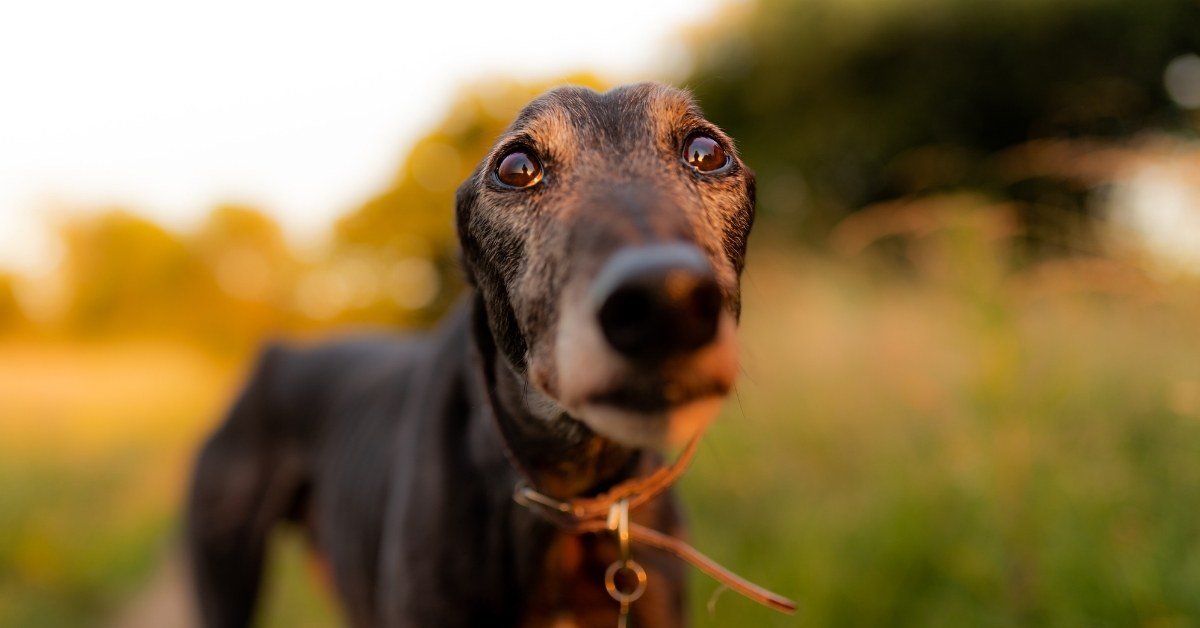 Greyhounds are one of the most affectionate breeds of dogs out there. They have an utterly non-aggressive nature and are excellent companions for children. They are loyal, calm, and relatively easygoing. All they ask of you is your unconditional love.

It’s thought that many greyhounds show extremely affectionate behavior because of their breeding and start in life.

As racing dogs, they are only ever socialized with other greyhounds and their owner who takes care of them. This lack of exposure to other people, animals, or the outside world makes them form deeper attachments.

When they retire from racing and come into your home, they form the same kind of attachment with you as ‘their person.’

Although there will now be outside stimuli, other people, and animals around them, they still only have eyes for you.

The lack of love in the first part of their lives – being more of a working dog. This means that they’re even more hungry for love and acceptance afterward, and seek it out.

Greyhounds would love to cuddle up with you. Despite their racing history, they are very lazy, with their favorite pastime being laying around on the sofa.

On cold mornings you might even struggle to convince them to go on a walk as they’d rather stay in bed.

This is because their thyroid uses the food they consume quickly, so they often need to sleep to conserve energy.

They can sleep for up to 16 hours a day just to have enough energy to go on a couple of short walks. Aside from walking and eating, they’d be happy to spend the whole day cuddled up with you.

Studies also show that cuddling produces oxytocin, a hormone most associated with feelings of love and happiness. Cuddling with you increases their bond with you and makes them happy.

How Do Greyhounds Show Affection?

Nitting is a nibbling behavior that’s common in greyhounds. Although there hasn’t been enough research to prove the cause definitively, it’s thought that they do this because they’re trying to show affection.

Nitting is where your greyhound will gently nibble at your skin or clothes with their front teeth. It’s not enough to draw blood and doesn’t feel like a bite, but persistent nitting can cause bruising.

It happens most regularly when you’re petting your greyhound or sitting having a cuddle, so it appears that this is an affectionate action.

It could be that it’s a behavior leftover from when your greyhound suckled at their mother or perhaps an attempt to groom you.

(Check out the full article about nitting – in a new tab.)

Alongside nitting, they may also grasp your arms or hands. This is when they gently place your arm in their mouth but don’t apply any pressure.

It’s not a bite; it’s more that they just want to hold your arm there for a while for closeness.

Despite their size, greyhounds are just lazy lap dogs when they’re not out chasing game.

Dogs can sense emotions, and your greyhound will understand when you’re upset.

They’ll make it their mission to come and cheer you up if you’re sick or not feeling yourself. This could be in the form of following you around wherever you go just to check that you’re still okay.

Greyhounds are one of the few dogs that display affection through body rubbing. They do this just like a cat would – gently rubbing their whole body against your legs, leaning against you, or sitting on your feet.

Greyhounds aren’t traditionally thought of as a ‘tail wagging’ kind of dog. But they do wag their tails when they’re happy to show you that they’re having a good time.

Because of their tail’s positioning and bone structure, it will just be the end of the tail that wags, so you may need to look a little more closely.

Greyhounds are known for being an extremely quiet breed of dog. They rarely bark at all, which is one of the reasons that they make great pets.

However, they may bark in excitement when you come home from work, which is a clear sign that they’ve missed you and that they’re happy you’re home.

Like all dogs, greyhounds lick to show their affection. Although it’s a compliment, it can be slightly disgusting to some people. You’ll need to put in place some training to show what you feel is acceptable, loving behavior, and what isn’t.

The simple answer is yes, but that’s what makes them great pets most of the time. Greyhounds just love the company and can get quite depressed if they’re lonely.

They’re affectionately named ‘Velcro dogs’ as they just won’t leave you alone. You’ll find that they follow you around the house when you’re at home as they need to check that you haven’t left them.

They’re listed as the 13th most clingy dog breed. And there are a few reasons that they love to stick at our sides so much:

Greyhounds will still to you more closely as they’re confident you’ll keep them safe. This is particularly true in elderly greyhounds as they start to lose their sight and hearing.

Greyhounds suffer pretty severely from separation anxiety, so it’s recommended that you don’t leave them for longer than 6 hours at a time.

Being away from you for longer than that can cause them to get stressed or panic. This can cause destructive behavior, such as chewing furniture as they attempt to break out and find you.

Crate training can really help with separation anxiety as the small space reminds them of the kennel life they used to have and feels more familiar to them.

It also means that they have a place to call their own where they feel safe. They don’t feel the stress of having to protect the whole house.

A lack of mental stimulation can cause your greyhound to follow you around just out of curiosity or something to do. Try to take them on a walk to a new place or give them a new toy. You should see them relax a little bit.

Your greyhound could be clingy because of the way you behave. If you stop to fussover them or give them treats, they’ll obviously start coming to you more often.

You can get around this, not by completely ignoring them, but try not to make it a big deal every time you see them.

A quick pat on the head will reassure them that you’re happy with their behavior without encouraging them to follow you constantly. They need to know their place, so set some boundaries.

What To Do If Your Greyhound Isn’t Affectionate

Greyhounds are known for being affectionate. If your greyhound is standoffish, there’s probably an underlying cause that you’ll need to determine and deal with.

Greyhounds are bred for dog racing but only actually race for around three years of their lives. After this time, they are typically put up for adoption to go into a loving home for their retirement.

During their working life as a racer, they won’t be used to the home comforts that you offer. They generally live with other greyhounds in kennels and get the love and affection they require from their kennel mates.

After years of kennel living, it can be daunting to come into a home with carpets, a nice warm fire, and potentially other pets and children.

If you have a newly adopted retiree, the reason for the lack of affection may be that they’re finding the whole experience a little overwhelming.

Give them a few weeks to settle down into the new routine, and they should come around. Ex-racers are known to be even more affectionate in the long run, just to make up for the years they’ve lost when they were working.

Greyhounds suffer from separation anxiety, but they can get anxious about new things, loud noises, or routine changes too.

If your greyhound used to be very loving and confident with you and has suddenly changed, it’s probably because something around them is upsetting them.

If they’re clearly upset, offer them a treat, and let them approach you slowly. Stroking their head and talking to them in a soft tone should make them feel a little better.

Usually, if you’re not worried, they’ll start to realize that everything’s fine.

Depression can affect greyhounds quite severely. It can be caused by a few things, including loneliness, stress, or a change in their environment – moving to a new house, for example.

The symptoms of depression are lethargy, loss of appetite, lack of energy, and a loss of interest in toys. You might even notice them sleeping more often away from you and keeping themselves to themselves.

Usually, the effects are temporary, but seeking help from a dog behavioral therapist would be a good idea if you do get worried.

As we said, greyhounds can be clingy. This means that they get jealous if your attention is directed elsewhere, and they’ve even been known to sulk.

If you have guests around, or you’re cuddling with the cat, they might sulk and stay away.

Dogs can sense your emotions, so if you’re stressed, they’re less likely to approach you because they’re worried that you might lash out.

The effects will be temporary; they’re just being respectful and giving you some space. You must never take out your stress or frustration on your greyhound.

Shouting at your dog will only upset and confuse them and may damage your relationship.

Most dogs sleep in a separate room from their pooch parents as it allows both parties to get some sleep without getting too excited.

However, it could really develop your bond with your greyhound if they were to sleep in the same room as you.

They feel a constant need to check if you’re okay. Being able to see you will lessen their anxiety and form a greater attachment to you.

You don’t necessarily need to allow them to sleep on the bed with you – you do need to maintain some boundaries. However it is worth noting, sleeping in their crate on the floor in your bedroom can increase their levels of affection.

Greyhounds are incredibly affectionate and will love you unconditionally. However, this can take up a lot of your time, so greyhounds aren’t the best choice of the dog if you have a busy schedule.

Their clingy nature can be cute for a while but might quickly become annoying and may undoubtedly put people off visiting you. It’ll take some training and patience to set the proper boundaries.

You need to be prepared to give them the time, love and be with them during the day. Greyhounds can live up to to 14 years, so it’s a big commitment if you don’t feel you have the time to love and cuddle them.