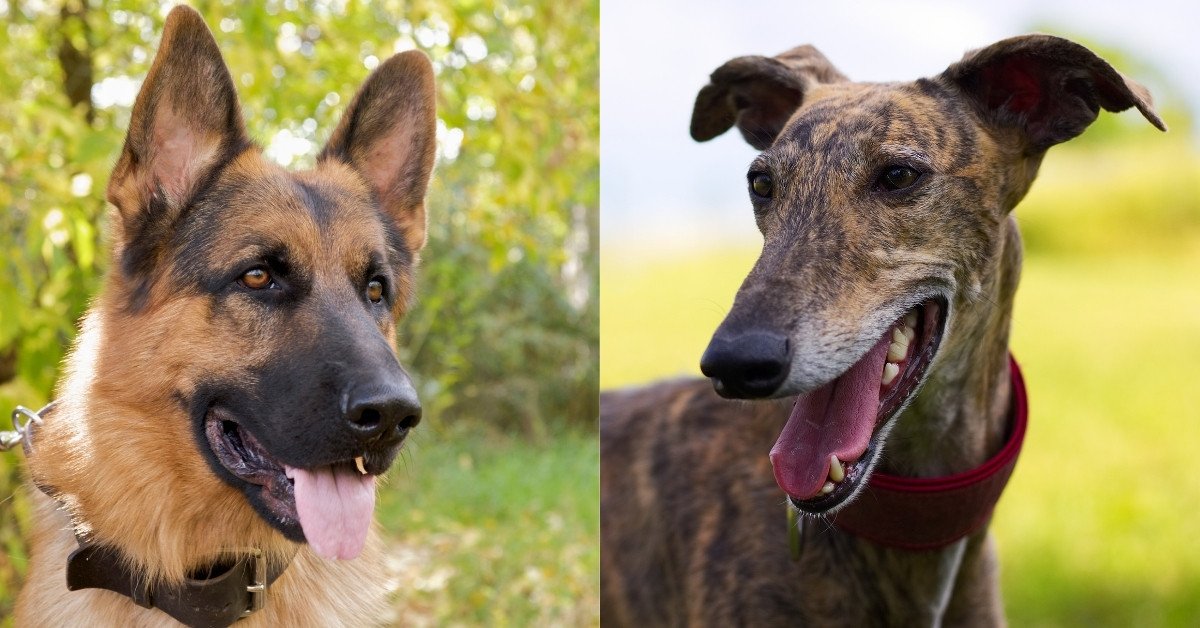 Both Greyhounds and German Shepherds make great pets for different types of families, yet both are a massive commitment when you consider their size, health care requirements, and general care and exercise.

However, mixed breeds can eliminate some of the problems that can come from pure breeds, if you mix them correctly.

So, what about a German Shepherd Greyhound mix? I’ve done some extensive research so you can figure it out easily in this article. Let’s dive in!

Greyhounds, and other sighthound breeds, are among the oldest dog breeds, tracing back to ancient Egypt, where they were worshipped and stood by the sides of Pharaohs.

Today, however, they’re best known for their ability to race around a track.

However, their track years don’t last too long. They tend to be retired before they’re 3 years old and there are shelters set up specifically to care for and adopt out Greyhounds at retirement age.

Adopting a retired dog often puts people off, as the wording implies that they’re older and may be prone to health issues.

However, this isn’t the case at all. Greyhounds are at the peak of health at retirement age and are ready to settle down with a family and give them all the love they deserve.

Greyhounds are a particularly loving breed, dedicating most of their time to hanging out on the sofa with the family.

They’re the couch potatoes of the dog world and love to cuddle.

They’re also an excellent choice for families with children, as they aren’t too boisterous and can be incredibly gentle and considerate.

A Little Bit About German Shepherds

German Shepherds were originally bred for just that – shepherding.

They’re great at herding sheep and other animals and are used to the hard work of farming. Their sturdy body build, and broad shoulders make them perfect for endurance and strength.

In more recent years, because of those reasons, they’ve been top of the list for police and armed services work. They’re the dog that immediately springs to mind when you think of a police dog.

Despite their fierce appearance and strong jaws, they can actually be very gentle and love other dogs and children. They’re a sociable breed and they can even get along well with cats.

German Shepherd Greyhound mixes are often known as Shephounds. They aren’t always bred from purebred German Shepherds and may be a few generations removed from the original pure breed. This leaves them with fewer distinguishing features.

German Shepherds are used to a lot of outdoor space and exercise. They’re incredibly playful dogs with big personalities and will need a lot of care and attention.

Their intelligence also means that they can get bored easily without a lot of stimulation.

Because greyhounds are typically quite anxious dogs, especially when left alone, this combination of hyperactivity and anxiety can cause some issues.

If you leave your German Shepherd Greyhound mix for extended periods, they may start to become destructive.

To overcome this there are a few things that you’ll need to have in place from day one:

Overall, the combination of your German Shepherd and Greyhound will work well. They’ll love you, protect you and love your family too.

The only other problem, relating to what I mentioned above, coming from the anxious greyhound side, is that they might get a little too attached and miss you when you’re gone (aka separation anxiety).

If you have a lifestyle where you’re out of the house a lot during the day, then this probably isn’t the breed for you.

A mixed breed is also likely to be unpredictable when it comes to size and weight. It entirely depends on which genes come from which parent.

A German Shepherd can reach heights of 26 inches at the shoulder and can weigh up to 90 lbs.

Whereas greyhounds are usually slightly taller at 30 inches tall, but because of their slimmer build, typically only reach weights of 70 lbs. at their heaviest.

Whichever way you look at it though, your German Shepherd Greyhound mix isn’t going to be a small dog.

You need to make sure you have a large home with a lot of outdoor space to keep them happy.

The coat of a German Shepherd Greyhound mix typically maintains the tan and black colors of its German Shepherd heritage. However, the ratio of colors can vary from dog to dog.

While a Greyhound’s coat is usually very fine, a German Shepherd’s influence on your Shephound makes their coats much thicker and coarser.

This is a massive benefit as it gives them natural protection from the sun. It also keeps them warm in cold weather, so they can be outside for much longer (two things greyhounds struggle with).

However, because of the oily nature of the coat, it will need brushing with a soft brush every few days and a bath every couple of weeks.

But! Their fur typically isn’t long like a German Shepherd, so you can forgo those expensive trips to the groomers as they won’t need a proper cut too often.

Overall, you get the best of both worlds when it comes to fur.

The most common health issues associated with German Shepherd Greyhounds usually come from the Greyhound side.

They are prone to hip and elbow dysplasia. This is when the hip or elbow joints become detached from the sockets over time.

It will mean that the hip or elbow rubs on the socket bone and gradually wears it away, making walking painful.

This can be corrected through surgery if it’s caught early enough. You’ll need to look out for your dog limping, whimpering while walking, or having tender or sore patches on their hips, legs, or feet.

Because of the athletic body structure and the high energy levels, a German Shepherd Greyhound mix will need to consume quite a lot of calories and carbohydrates daily.

They use a lot of carbs when they’re sprinting to keep their energy levels high. The rest of the time, when they’re laying around at home it is to recover the energy that they’ve used.

You should stick to dried food where possible – softening it with water if that’s how your dog prefers it.

This will ensure that your dog doesn’t develop painful gastrointestinal problems like bloat (also known as GDV). Bloat occurs when a dog’s stomach twists and the gas is unable to escape.

Greyhounds in particular are susceptible to this because their stomachs are compact making them lighter and more aerodynamic for running.

A high-carb diet or extra small meals will help them to recover more quickly, keep their energy levels higher, and avoid issues stemming from bloating.