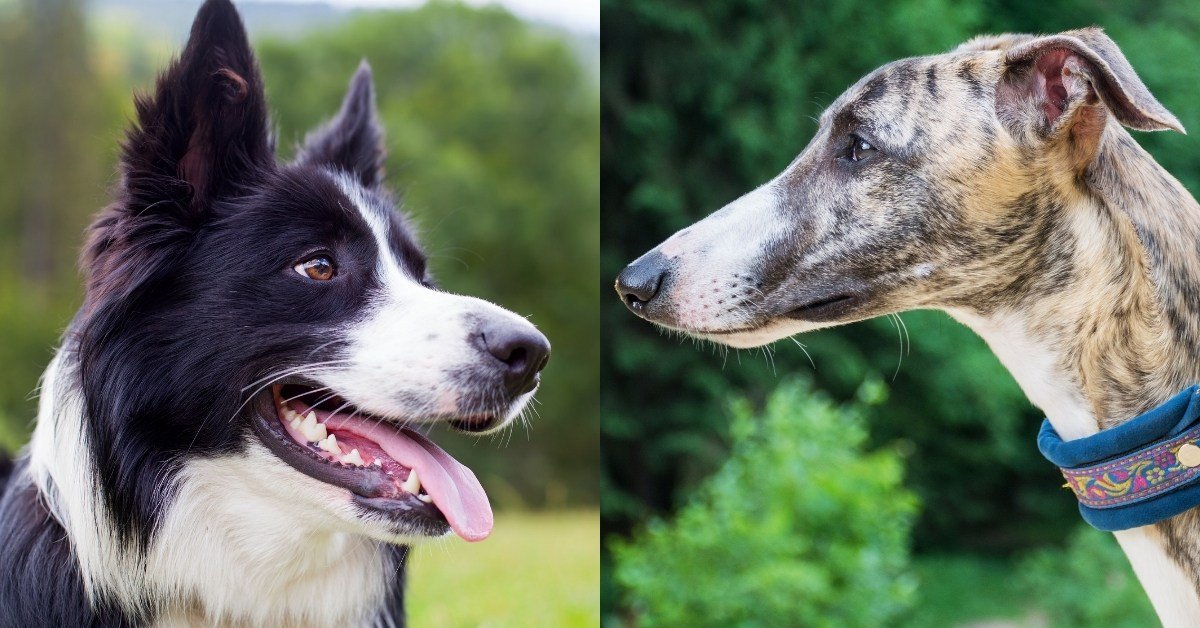 Welcoming a dog into your family can be a big decision. You must find a breed that works well with your space, routine, and personality.

So, what about a Border Collie Greyhound mix? Well, I’ve done some research and made this little guide of everything you need to know about this particular mix. Let’s dive in!

Greyhounds make amazingly loyal pets and they’re relatively easy to look after. They don’t actually need a ton of exercise as their bodies are equipped for sudden bursts of speed.

One longish walk per day will mean that they need to relax for the rest of the time. Greyhounds typically sleep between 18 and 20 hours per day.

Once they’re retired from the track (at around 2 – 3 years old) they’ll spend the remainder of their lives being complete couch potatoes.

They can live up to 12 years and during those years they will love everyone. They’re great alongside small children, but don’t make particularly good guard dogs as they’ll lick burglars rather than bark at them.

However, because of their strong chase instinct, it’s not advisable to house them alongside small pets or cats, as they will have the urge to chase them down. It’s what they’re bred for after all.

A Bit About Border Collies

Collies are bred as working dogs, generally herding sheep and other animals on a farm.

They originated from the borders (hence the name) between Scotland and England, where sheep farmers used them to keep sheep on their land.

Because of this, they’re incredibly active and need a lot of room to run around.

Their working life could have them comfortably running 15-20 miles per day in the harsh weather and temperatures of the Scottish borders.

This means they’d be suitable for outdoorsy people or people that have a lot of land.

Despite their independent nature, they’re also one of the most intelligent dogs out there and are fairly easy to train. They’re naturally loyal pets and once they’ve bonded with you, they’ll do anything for you.

They’re also a fairly good breed if you want a reliable guard dog as they are quite territorial and their loyalty towards you as part of their family will give them a fiercely protective nature.

A Greyhound Border Collie cross is the dog that most people think of when they talk about a lurcher.

A lurcher is technically a cross between a greyhound or any other sighthound (such as a Whippet) and any other breed.

However, Greyhound Border Collie mixes are so common that they’re often seen as their own breed today.

Both the Greyhound and the Border Collie have a very strong prey drive because they’re bred specifically to hunt or control other animals.

For this reason, it’s never advisable to have a Greyhound Border Collie mix in the same house as any small animal or cat.

While cats could work with some training, you should never let your dog and cat into the outside space at the same time. This is because a greyhound’s prey drive increases outside or when the animal they’re chasing begins to run away.

Border Collies’ working background also means that they love company. Herding sheep is a team effort, so their pack mentality is high.

This means, if introduced early, they will love the company of other dogs. Having two dogs will also help to disperse some of that excess energy.

Greyhounds also love company, so much so that one of the biggest issues with them is their separation anxiety when left alone for too long.

The mixed breed is best suited to a home with lots of activity, lots of space, and very little alone time. If you have a full-time job, they may not be the dogs for you.

When you’re buying a cross, you can’t guarantee how much of each trait your puppy is going to get from their parents. It’s always best to prepare for every possibility.

Collies are typically around 22 inches at the shoulder, whereas Greyhounds normally reach up to 30 inches. Your dog could be anything in between these heights.

Because Greyhounds are naturally taller, they can reach weights of 88 lbs., whereas a Collie would typically only reach around 50 lbs. in adulthood.

Again, your dog could be anything in between this.

Border Collies are the standard black and white coloring; however, Greyhounds can come in any color from black, white, brindle, or a mix of two or three colors.

This means that your Border Collie-Greyhound mix could turn out to be basically any color.

However, the most common color is black and white, especially if the Border Collie has the dominant pigment gene.

Greyhounds tend to have very thin coats as they need to be aerodynamic, however, this means that they are incredibly susceptible to cold temperatures.

Border Collies on the other hand are the complete opposite, with thick, long coats to keep them warm.

This usually means that your mix will have a coat that’s somewhere in the middle.

Meaning they’ll need grooming a couple of times per week with a soft-bristled brush – they do shed too, so be prepared to have hair-covered carpets.

Border Collies are known to be one of the healthiest breeds of dogs with barely any health issues. They can also live up to 17 years, one of the longest lifespans in the dog world.

You may find that, later in life, your dog suffers from eye problems or late-onset epilepsy. But, these things are usually treatable with medication and a good personalised diet.

Greyhounds, on the other hand, have a natural lifespan of around 12 years.

This isn’t because they’re particularly unhealthy. However, it’s because their organs and limbs are put under much more pressure due to their body shape.